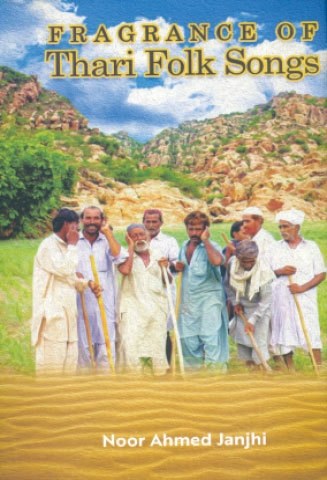 NON-FICTION: SONGS FROM THE DESERT – Journal

Fragrance of Thari Folk Songs is a slim and compact introduction to a treasure trove of Pakistani folk culture. The book features over a dozen and a half popular folk songs from the Tharparkar region, along with translations and commentaries, to give the reader a taste of the richness and variety of our local desert culture.

The author, Noor Ahmed Janjhi, is from the village of Vakrio in Tharparkar. He is a prolific scholar, researcher and author, who has written extensively on regional literature, Sufi poetry and folklore. He speaks Sindhi, Urdu, English, Arabic, Persian, Dhatki and Hindi, and is a prominent member of the Sindhi Language Authority. He has edited magazines and translated a wide range of material between Sindhi and English.

Janjhi writes: â€œFolk songs are a valuable asset to the language and literature of any country. Sindhi folk songs are the mirror of Sindh culture and literature, reflecting the clear and crystalline image of the life of the masses. This great spring of people’s aspirations and languages â€‹â€‹is full of humble and beautiful thoughts despite the unavailability of the traditional poetic code. He notes in the preface how he grew up among the communities of the Sindh desert, watching these songs being performed throughout his childhood, the strong impression they made on him and how “[p]people put all their soul into these songs.

The book begins with a brief discussion of the region, its geography, culture and the variety of languages â€‹â€‹spoken. This is followed by a series of chapters, each devoted to a particular folk song. The text of the song is followed by a translation and a commentary, interspersed with notes from scholarly literature. There are some 19 songs covering a wide variety of topics, a true snapshot of life in the desert.

Extensive literature on popular Thai folk songs not only introduces the reader to their rustic beauty, but also raises the question of how we experience our culture.

For example, we have ‘Moriyo’, the song of the peacock:

O peacock! You snatched me from my sleep In the rainy and stormy night With your sweet song in the dark night.

You sing mournful tunes, Scattering pain and love on this stormy night.

No one will sleep after hearing such nostalgic melodies.

The songs are rich in metaphors; they are full of evocative imagery and present a vivid and lush tapestry of life in the arid desert. The lyrics and scenes of some songs change over time, but the tone, melody and themes remain the same. In “Warsaro”, a monsoon folk song, a young woman misses her traveling husband and laments to her mother-in-law:

It is raining heavily in the north.

My monsoon passes without you, oh my cloud!

The cold north breeze tore my garland of nine pearls.

Your son is far from me, oh mother-in-law!

Next we have â€œDoroâ€, a separation song, usually sung before a long trip, or when a new bride bids farewell from her parents’ house or village:

This brings us to the larger question: what is being done to preserve and celebrate this cultural heritage? We should be working on visually rich audio recordings, music albums, documentaries and dramas. National efforts should be made to showcase these indigenous cultures, their practices, their way of life and their festivals.

There are lotus plants in the river And can I sacrifice myself on the trees On the banks of the dried up river bed.

My other friends are closer to me, oh! my mother, my beloved daughter lives far from me …

Thinking back to crossing the sand dunes,

I saw my native village remained far away …

The doro or thread, in this case, symbolizes strong and unbreakable relationships, a golden rope that winds through life, an unchanging constant. The emotions encapsulated in these songs may sound very simple, but they have a purity and intensity that surprises us.

The book has a few drawbacks: the writing is uneven and often oscillates between high academic exposure or informal dialogue, disrupting the flow of narrative. Most of the song clips are followed by English translations and commentaries, but some are not, leaving the reader in suspicion and uncertainty. The translation is poor in places, which detracts from the charming lyricism of the songs. It would be very interesting to make a serious effort to extract the intrinsic melody of these songs in English and make them appealing to a general readership.

This brings us to the larger question: what is being done to preserve and celebrate this cultural heritage? A quick online search does not show any significant resources. We should be working on visually rich audio recordings, music albums, documentaries and dramas. National efforts should be made to showcase these indigenous cultures, their practices, their way of life and their festivals. Are these issues taken into account in the ongoing government campaign to promote tourism?

Beyond the charm and aesthetics, the true value of this contribution is perhaps to remind us of the importance of popular culture and tradition, a world which is rapidly disappearing under the tidal wave of globalization. We tend to live in a monoculture characterized by short attention spans and quick fixes, a world of blogging, social media, and Netflix. We don’t “participate” in culture now as much as we “consume” it. Today’s cultural artifacts – movies, books, and TV shows – feel like a fast-paced assembly line. The transcendent elements have been stripped.

We no longer have a direct relationship with nature – a monsoon song is little more than an exoticism. Songs about nature and its rhythms, odes to peepals on the banks and songs of birds after thunderstorms, can sound charming, picturesque and very dated. But popular culture can be a powerful antidote to our modern consumerist outlook. They both have their pros and cons.

Some 700 years ago, the famous scholar and intellectual giant Ibn Khaldun described civilization as the inherent tension between the culture of city dwellers and that of desert dwellers. Reading Fragrance of Thari Folk Songs, one can’t help but think that he was definitely on to something.

Adventures in the Arcata Swamp – Times-Standard