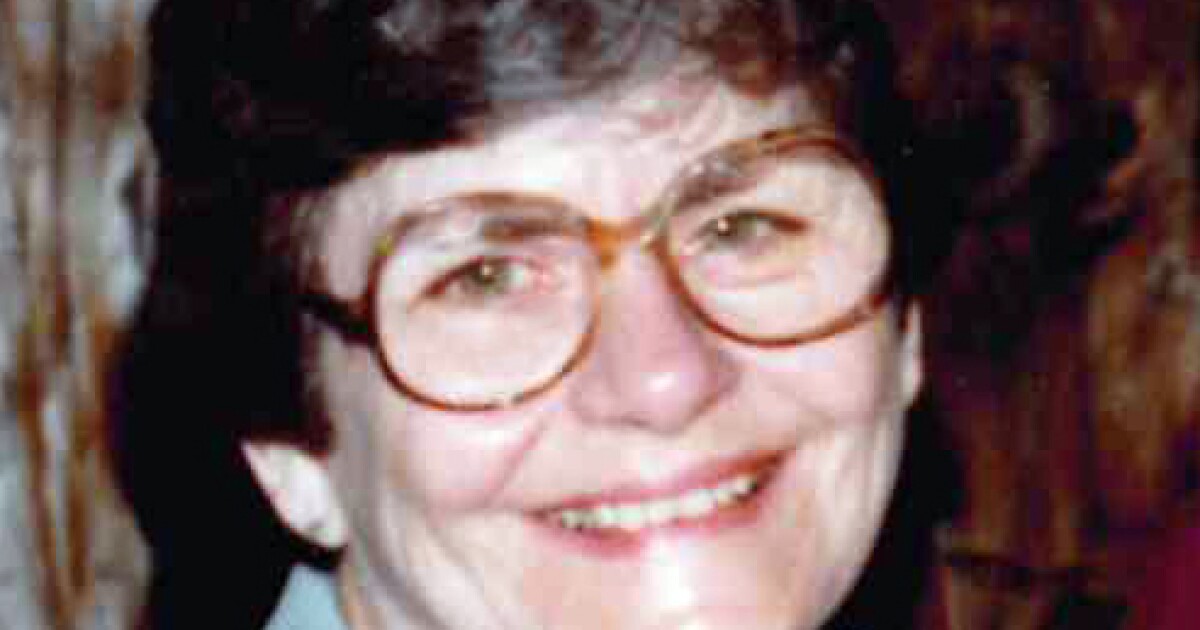 Beverly Lucille Garver Siddoway – A beloved and caring wife, mother, sister and friend passed away at her Belgrade home on September 25, 2021, in the care of her son Tom. Bev’s other three sons were home visiting hours before his death. Due to a twist of fate, Beverly was born on March 6, 1929 in Los Angeles, California, while her mother was visiting one of her brothers. The family home was in St. Anthony, Idaho. Bev was born to Bessie Sara (Clark) Garver and Earl Raymond Garver and raised in St. Anthony. She attended school in St. Anthony, graduating from South Fremont High School. She then trained as a nurse at St. Benedict’s Hospital in Ogden, Utah, and graduated as a registered nurse in 1953.

She then met Francis “John” Holley Siddoway of Teton, Idaho, fell in love and married in December 1953. They began their married life in St. Anthony where sons Jon, Michael and Paul were born, and then went on to moved to Manhattan, Kansas where their youngest child, Tom, was born. After John graduated from Kansas State University, the family moved to Sidney, Montana in 1963, where John was appointed director of the new USDA-ARS research center. Beverly was not only a housewife, but worked for many years at the Sidney Community Hospital, even during the years when the boys were young. Bev made sure that her husband and boys always had delicious and filling meals, she was a great cook. She was particularly shrewd in making sure her house was always clean, she had learned, at least in part from her years as a young girl cleaning houses in St. Anthony and her time training nurses under. the supervision of the nuns of St. BÃ©nÃ©dicte. As a registered nurse, she served as a floor nurse and obstetrics and gynecology nurse and spent many years as a surgical nurse at Sidney Hospital. She was well known in the community as a caring nurse and hard worker in the hospital and was recognized for her care with special awards from the hospital staff. The nuns at Saint-BenoÃ®t Hospital taught their students to treat their patients â€œas if they were Christ himselfâ€. Bev stuck to this principle with everyone in her life.

After the death of her husband, John, in 1984, she moved to Belgrade, Montana, to be closer to her family and her childhood home in Southeast Idaho. Bev worked as a nurse at the Churchill Nursing Home for many years, providing quality care to end-of-life patients. She was also very proud of her home garden. Bev had planted blue spruce, black locust, rowan, a Cotoneaster shrub and a variety of roses. She also made sure to have plenty of ornamental flowering plants scattered around the property. And she definitely had a green thumb as she had successfully planted Douglas Fir, Ponderosa Pine, and Lodgepole Pine on the north side of the house that thrived over time. She loved to see and feed all the different birds that entered the yard and adored the occasional cottontail rabbit visits. Bev had several dogs that she looked after and loved over the years, all Labradors that she owned or kept for her boys. She also became very attached to Feck, Tom’s parrot, who was with her for the last years of her life. Feck and all the Labradors loved Bev as much as she loved them.

Her four boys thought she was the best mom in the world and carried her powerful lessons of kindness and love into all of their days!

Bev’s primary caregiver, her son Tom, has spent the last few years looking after her at her home. Tom is a professional nurse who was particularly attentive to all of his needs during this period of his life. Tom had recently taken Bev for a weekend to a rented cabin along the upper reaches of the Gallatin River. Bev loved the outdoors, especially the Old Faithful area of â€‹â€‹Yellowstone National Park and the Grand Tetons that she could see on the horizon from her family home in Idaho. Special thanks to Colleen Gibbs for all her love and care for Beverly over the past few years.

Bev donated his body to the WWAMI School of Medicine program at Montana State University, where it will be used to educate first-year Montana medical students.

Bev will have a Catholic Mass celebrated on his behalf in the near future.

A memorial service for Beverly will be held in the coming weeks.

A memorial donation in Beverly Siddoway’s name can be made to the Montana Audubon Society at the following email address: mtaudubon.org or by mail to: Montana Audubon, PO Box 595, Helena, Montana 59624.

How Axie Infinity is shaking up the game