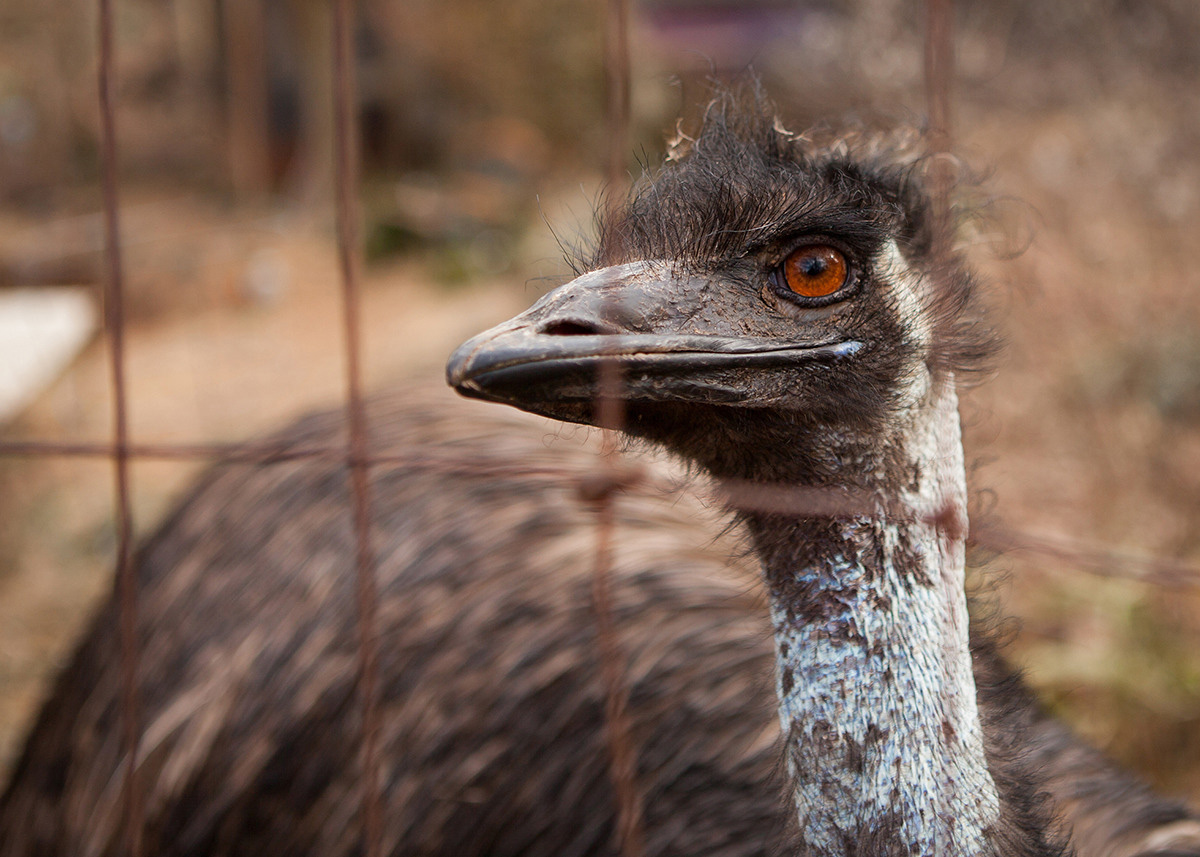 Atlanta has long been known as a hotbed for transplants: people from all over the world come here to find their place and make a living. This was also true for Big Lou, an emu who arrived in the town in 1994. After living nearly three decades in the Lake Claire Community Land Trust (LCCLT), the local celebrity passed away peacefully on July 28.

Noah Glassman was 15 when he convinced his parents to buy an emu from a Sandy Springs vendor with a yard full of them. The cost? Fifty dollars. “I thought it would be interesting and exciting,” he says.

His family took the bird home, where he began to acclimatize to the LCCLT lifestyle. But before long it became clear that they weren’t ready to deal with the unusual animal. That’s where longtime Lake Claire resident Dawn Aquamarine Aura came in. At the start of the LCCLT, his garden was connected to Noah’s, forming a large enclosure where Lou hung out with his friends: a couple of goats. It quickly became clear where the creature’s loyalties lay.

“We both fed him, but Lou decided he ate better on my side of the pen,” says Dawn, who has volunteered in animal rescue for years. “When the yard was re-fenced after the goats left, I offered to keep him by my side.” She took care of Big Lou for the rest of her life.

Over the decades, Lou had other neighbors: chickens, ducks, another emu (the two didn’t exactly get along, so the newcomer was relocated). But Lou and Dawn have formed a special bond. While she admits “he had a mischievous side”, noting that he “sometimes liked to pull scrunchies out of girls’ hair”, she calls his friendship “an understated stable presence”. [with] no drama.”

It is also a common refrain of its visitors. When you ask people for their Big Lou stories, you get pretty much the same thing: I took my visiting friends to see it. My kids loved feeding him. He was special, a Lac Claire staple, so sweet despite his size. Although these memories get mixed up after a while, the thing that remains clear is the joy and the fact that Big Lou gave so many of it in Atlanta.

Here’s a fun fact: “Big” was originally an acronym. BIG, so to speak, stood for “Beauty in the Garden”.

Mack Williams is an animation director and producer who lives in Queens. the UGA graduate’s work has been featured on sesame street and Saturday Night Live. Between his time in Athens and the Big Apple, Mack spent five years on Adolphus Street, a block north of the LCCLT. While his old duplex “has since been replaced by a McMansion,” Mack harbors fond feelings for Lake Claire. And a lot of those feelings come from his visits with Big Lou.

“I often took my dog, a boy named Sue, for walks in the Land Trust,” Mack recalled. “Lou was Sue’s mortal enemy. Every time we walked past his habitat and Sue saw Lou, he would freak out, bark, and go crazy seeing a literal dinosaur. Lou, a consummate professional, was unfazed. He walked to the fence, expecting grapes or other treats, completely ignoring Sue’s barking frenzy.

Eventually, Mack decided that maybe walking the dog in front of Big Lou wasn’t the best idea. But he was fascinated by the old bird, even if he was a little intimidated, so he continued to visit it and one day “brought up the courage to feed it from my hand. It gently pecked the grapes from my palm, without even leaving a scratch.

Big Lou’s diet is worth mentioning: he spent his time in Atlanta enjoying grapes (a favorite), crackers, melons, leaves and raw vegetables from LCCLT visitors. Dawn calls his diet “intensive”, noting that “he was supposed to eat dry cereal pellets, called ratite food, but he wouldn’t.” Turns out our man Lou was a bit of a geek when it came to the things he allowed in his stomach – a real foodie. “He wanted – and got – fresh vegetable and fruit salads,” adds Dawn, “as well as canned corn, beans, fresh frozen green beans, cooked brown rice and a mix of tortilla chips, popcorn and peanuts, twice a day for 29 years.”

Dawn says she didn’t have time to figure out what Lou meant to the town. “Since he became a public figure, I had to deal with the outpouring of love and support from people who knew him,” she explains. “But I will remember for the rest of my life how sweet, kind, kind, well-behaved and loving he was. He was my close friend and I was his.

If these past deeply stupid pandemic years have taught us anything, it’s that we can find happiness in new and unusual places. Maybe you need to get some alcohol to take to a restaurant. Perhaps it’s about eliminating commuting and setting new standards for working from home. Or maybe it’s just finding pleasure in a prime example of the world’s second largest living bird species, an example that just happens to reside in your town and, until recently, could be visited anytime. , free.

Eric Thompson’s family moved to Lake Claire just before the pandemic hit. His son was two when he met Big Lou, and Eric says having the LCCLT just steps from his home was a game-changer for a young family trying to navigate lockdown isolation.

“Big Lou was something we looked forward to, a friendly face in dark times,” Eric says. “We looked into his burning orange eyes and had the feeling that he really loved us.”