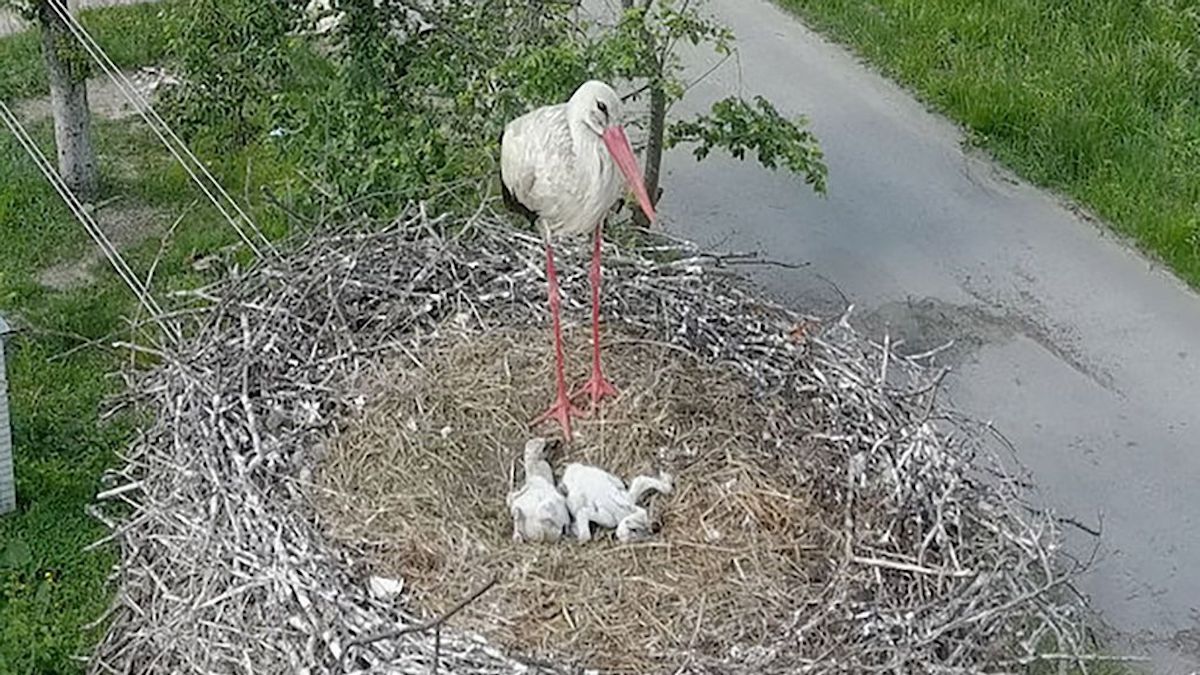 A Ukrainian photo of “sacred” nesting storks has become a “symbol of hope” for the country during its long battle with Russia.

The new nest comes as the species has repeatedly faced missile and artillery strikes in the shell-shattered outskirts of Kyiv.

Russian President Vladimir Putin launched his invasion in February just as storks arrived to deliver their chicks, forcing some to abandon their young or nest elsewhere.

But 10 miles from Kyiv, in the shattered town of Moshchun, footage shows a set of storks that have taken up residence among the ruins.

Storks are a sacred bird in Ukraine where they nest in spring after wintering in Africa.

Birds are considered a symbol of the onset of spring in the country as well as an age-old symbol of fertility.

Birds are also considered to promote a great harvest as well as family happiness, procreation, peace and love for the country.

Of the 224,000 storks that visit Europe each year, 16% set up their nests in Ukraine in spring and summer.

Footage shows their huge abandoned nests atop telephone poles and electricity pylons in the face of Russian bombardment.

Photos of the birds taken by the Ukrainian Society for the Protection of Birds showed the hellish conditions the birds had to survive in the middle of the war.

Oleg Dudkin, who heads the Society, explained: “This year the horrific explosions, shelling, gunfire and roar of tanks frightened the storks and so they took off and flew away.

“This couple was lucky enough to arrive late, when the invaders retreated and silence fell on the mother bird’s little homeland.

“She has become a symbol not only of a mother’s devotion to her child, but also of the great love and devotion of Ukrainians to their homeland and a will not to leave, even if it is destroyed by this terrible war. .”

Ukrainians have even taken to treating the birds like other refugees, helping to support the birds after grueling flights to escape the war zone.

Some birds, however, have started to return to their usual nesting areas, bringing hope to Ukrainians living in the aftermath of the Russian invasion.

Dudkin added: “The storks returned a few days after the Russian troops left the village and immediately started rearranging their usual nesting place.

“Somehow the storks seemed to sense that the village was calm and now they could go home.

“A tired and exhausted stork was seen sitting on the bonnet of a car stuck in a heavy traffic jam during the mass evacuation from the Chernihiv region.

“The bird was trying to drink water from a cup he could see through the windshield on the dashboard.

“The pensive driver raised his cup to the stork through an open window and the thirsty bird began to drink, paying no heed to people getting out of their cars to take pictures.

“Storks will always be amulet birds for Ukrainians, enhancing hope for peace and the inevitable victory of spring over winter and good over evil.”

Produced in collaboration with SWNS.

This story was provided to Newsweek by Zenger News.