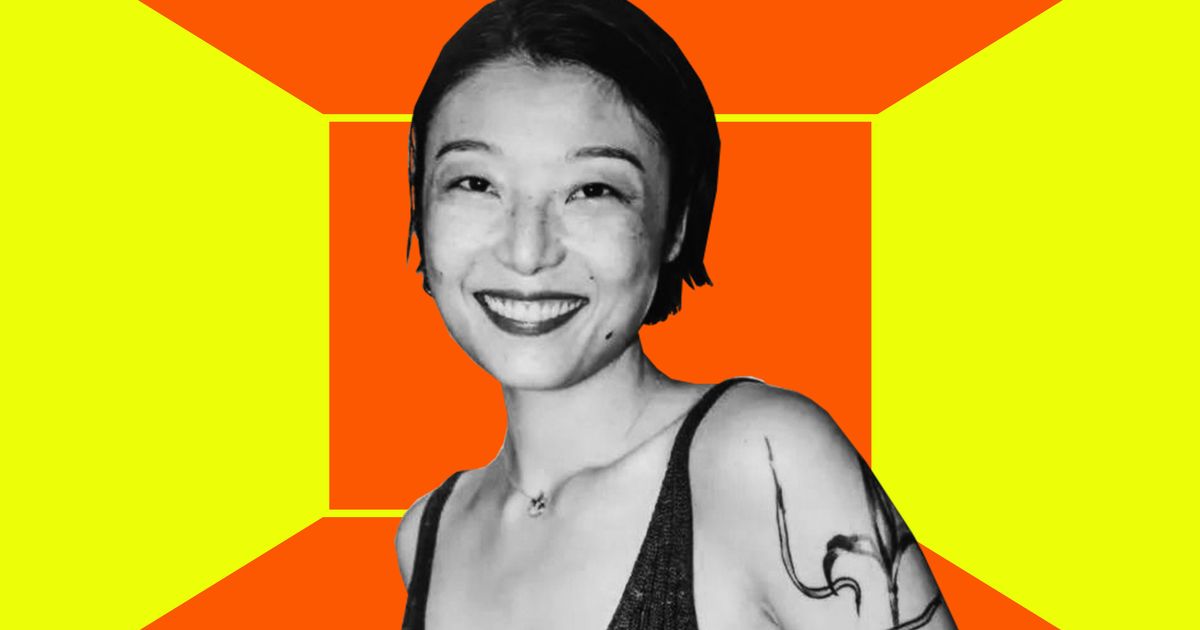 What’s hanging above your couch?
I don’t have a sofa at the moment, but there is a piano with a bench in the living room, and above it is a drawing by my friend William Buchina, who is an incredible artist. He traded the drawing for a one-month sublet in my old apartment.

What was the first job you had in New York?
The first paid gig I had in New York was as a still photographer for a student film at NYU. At the time, I was hanging out with people from the MA film program.

What color are you always drawn to?
Purple, orange and gray. Purple is a color that I find pleasant to look at. There is something a little mysterious there. I find it quite sexy. I love the vibrant energy of orange. It really goes with everything. And gray is soothing. I’m renovating my store right now, and the whole space is silver and gray.

What art or artifact are you most surprised to own?
I have some zines from photographer Ren Hang. I got them from an art bookseller in China shortly after Hang’s death, when there was still some availability of his work, but now it’s impossible to find. These are very fine booklets composed of his photographs. Each one is named after a month, but I think he only made them until November. The format and style of each month is different and he only printed 100 copies. I couldn’t believe I had gotten my hands on it.

Which New Yorker would you like to date?
The first person that comes to mind is Pete Davidson. He seems a bit aloof, and there’s something about his coldness that’s distinctly New York. He doesn’t take himself too seriously and is open about his thoughts and vices. He looks like a fun person to smoke a joint with.

What’s the last thing you did with your hands?
While I was in a restaurant waiting for my check, I played with napkins and made little animal figurines.

Is there something you have multiple versions of?
It’s pretty random, but I have three copies of Kae Tempest’s poetry book. New Elders. I bought one when I was in Greece because I was familiar with their work and liked the cover, which features decorative figures used on pottery. A friend gave me one. And I found one left by a roommate. They are all designed slightly differently, which I find interesting.

Which museum in New York do you always go to?
The Met, since it gives me an excuse to go to Central Park too.

What do you always have next to your computer?
I have a brass Zippo lighter that my boyfriend gave me. I like to open it and close it.

Where is the best view in town?
Standing in front of 169 Bar on East Broadway looking west, you see these layers of New York architecture: the apartment buildings of Chinatown, the Manhattan Bridge, the City Hall District with neoclassical buildings and steel and glass skyscrapers. I find it surreal. For me, it’s a snapshot of New York.

What building or object do you want to redraw each time you see it?
Currently the biggest eyesore for me are these sculptures on Allen Street between Canal and Delancey. Some of them are so excruciating! They appeared overnight a few months ago. I guess other people here don’t like them either, because a lot of them were destroyed immediately. New York could do so much better with its public art. People see more public art than what’s in a museum. Won’t you put something nice here? Something that represents the neighborhood?

What is one thing you would change in your field?
I have a big problem with fast fashion. Working in retail, something that has always bothered me is how clothes are discounted after a season. It makes no sense to me. Just because new things are coming, are old clothes no longer good? They are just as good and just right. I understand that a store needs cash and customers want trendier things and go for newer stuff, but that creates a huge burden.

If you could live anywhere in New York, where would it be?
Where I live now: the Lower East Side. My store is here, and it’s right next to Chinatown, where there’s such a sense of culture and where I can get groceries and delicious, affordable food. Historically, the Lower East Side has been an immigrant neighborhood, and being from China, I feel an affinity for that. Over the past few years, a lot of people have moved into the neighborhood – inner-city kids, new stores, new restaurants – and we have so many neighborhood friends, residents and business owners who s stop and say hello.

What would you do in reserve if it ceased to be produced?
Coffee and cigarettes.

What do you do to get out of a creative rut?
I talk a little with friends or people to distract my emotions from being so attached to what I was thinking.

Where was your first apartment in New York and how much was the rent?
It was in Greenwich Village around 2010, when I was going to NYU. The rent was $2,100 for a two-bedroom apartment I shared with my boyfriend at the time. It was expensive, but we got free internet at the nearby law school.

Where in the city do you go to be alone?
It was a place in my store before it was renovated. On the second floor, I had a slight bird’s eye view looking out the window, which faces the corner of Orchard and Hester. When I was sitting at my desk, I could see everything happening at the crossroads and no one could see me. I was playing music and felt like I was in my own little world where I could do whatever I wanted.

What’s the worst career advice you’ve ever received?
When my mom felt like I was working too hard, she said I should find a rich man to make it easier. Being a mom, she didn’t want me to struggle. But it’s not for me, and it doesn’t work the way she thinks it does. Maybe he could help me financially, but ultimately he’s not there to help me improve.

What have you given someone that you wish you could get back?
I don’t regret what I gave.

What is your favorite restaurant in NYC and do you order regularly?
Wayla, a Thai restaurant on Forsyth Street. I find all of his food incredibly delicious. I like to try new things, but I also always order crab fried rice.

What descriptive phrase do you want in your obituary?
Something about having a good time – “Oh, that was fun.”

much more than a weird wet dog