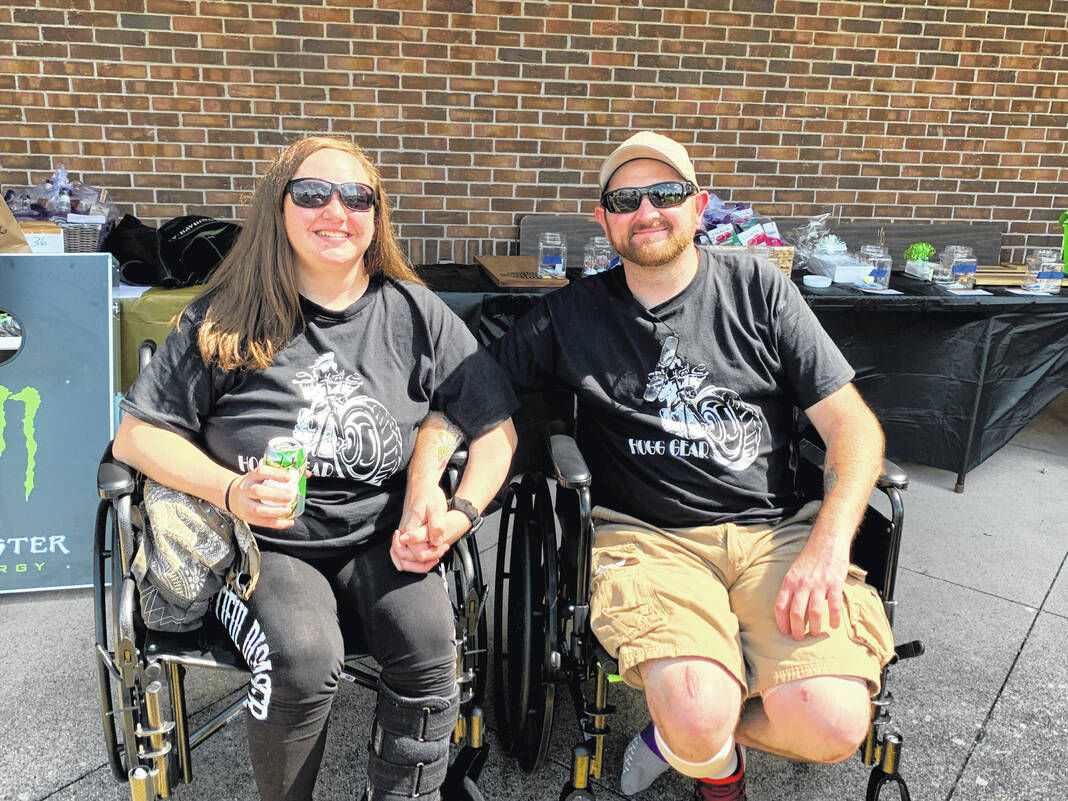 ARCANUM – ​​A special event was held Saturday in the parking lot of the Family Dollar/Dollar Treet in support of Graham Guttadore and Lauren Mowen. The couple were seriously injured on June 29 when a car pulled up in front of their motorbike. Guttadore spent almost a month in the hospital and Mowen was in the hospital for over two weeks. Both have a long road to recovery ahead of them.

Chris and Tammy Lovett, owners of the Hogg Shop, located on State Route 49 outside of Arcanum, ran the event. Chris explained that due to the couple’s long recovery, it was important for the community to come together and help them. Neither are able to work, but, as Lovett pointed out, the bills keep rolling in.

The couple are extremely grateful for the support. “It’s absolutely amazing,” Guttadore said. “Everything Chris and his wife have done to put this together is phenomenal.”

Lovett was thrilled with the support he received from local businesses, CareFlight, Carl’s Body Shop, the Arcanum Fire Department and the Village of Arcanum. He said the village was great to work with and came early in the day to sweep the parking lot so CareFlight could land.

The organizers also continued to receive raffle items until the start of the event. “People just came over and gave me money for the couple,” Lovett said.

While there were some amazing motorcycles on display, it was CareFlight and the 1966 version of the Batmobile that really caught people’s attention. Crowds gathered to get a glimpse of the vehicle that wowed viewers in the 1960s. The Bat motorcycle, complete with Robin’s sidecar, was also on display.

Even before the performance, the community was supportive. Mowen said: “The support we have received from both communities is incredible. He’s from Darke County and I’m from Preble County. We could not have come this far without the help of our family, community and friends. Guttadore added that their employers work with them. “The companies we both work for have been very helpful to us throughout this process. Stay in touch with us and be reassured that we both have jobs to resume, ”he said.

Guttadore, an Arcanum firefighter, was thrilled to see an Arcanum fire truck and CareFlight on display. When asked if they had taken a ride on CareFlight, they both simultaneously replied, “Yes.” Mowen added, “together.”

Guttadore said he remembered everything about the accident. He said he saw it coming and remembers flying through the air. He also remembers talking to first responders at the scene and the flight to Miami Valley Hospital. He remembers everything until they pull him out of the helicopter. “We are very lucky that neither of us had a head injury,” Guttadore said.