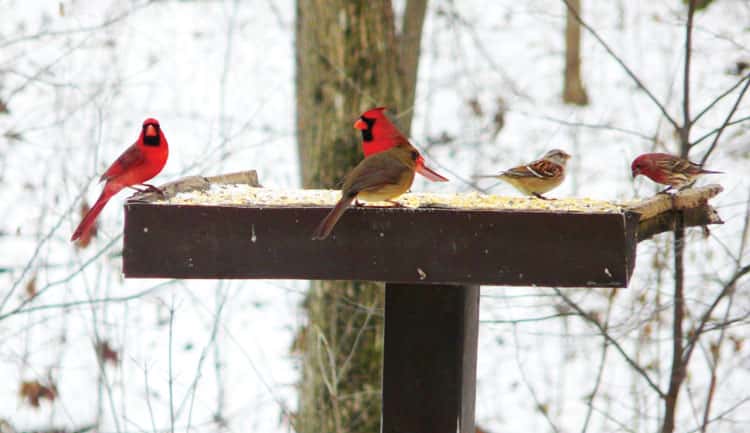 We waited for them to arrive and they never failed to disappoint us. Like clockwork, at dusk, they appeared. Unmistakable, their bright red plumage seemed to defy the darkening light around them. In small groups of two or three, the wary males would appear, feed briefly and then scurry off into the darkening woods beyond. Although missing, their identity was beyond doubt. The bright red birds were striking and unforgettable.

Cardinalis cardinalis, better known as the Northern Cardinal, is a bird of backyard feeders and the wild. Measuring 8 to 9 inches long and sporting brilliant red plumage, a black mask and an acutely angled crest, the Northern Cardinal has been called the most familiar, conspicuous and elegant bird of all. It is often cited as the bird responsible for attracting more birdwatchers than any other species and its cheerful song catches the ear as easily as its coloring catches the eye. Known as one of the few North American songbird species in which the female sings, the female is thought to sing while incubating her clutch of eggs to inform the male of potential predators and let him know when the “coast is clear” to fly. with food at all times. Yet the cardinal’s repertoire is much broader than just a cry of alarm, encompassing more than 24 songs.

Ranging through various habitats from Maine through most of the continental United States and south to Mexico and Belize, this member of the finch family was traditionally a bird of southern climates that adapted its range to the north. Now known as a New England bird and year-round resident, the cardinal is a mainstay at bird feeders even in the coldest winters. With its colors defying the whites and grays of winter, it’s a welcome sight that brings a bold burst of life to the dark, sleepy months. With its non-migratory habits and the fact that it does not moult into dull plumage like most of its conspecifics, the cardinal remains on the radar of bird watchers, naturalists and photographers. Taking their name from their color reminiscent of the scarlet biretta and the vestments of Catholic cardinals, the hues of their plumage are acquired from the carotenoid-rich fruits and red-pigmented berries they eat. Females, on the other hand, sport the bright red crest and accents but retain gray-brown plumage. With a tapered pink beak and long tail complementing their appearance, it’s easy to see why so many people are in love with them. In fact, cardinals were kept as pet birds until 1918, when the International Migratory Bird Treaty Act made the practice illegal.

Its popularity is not limited to nature lovers alone. Northern cardinals are the most popular state bird of all, serving as the state bird of seven states; Illinois, Indiana, Kentucky, North Carolina, Ohio, Virginia and West Virginia. Still, the bird’s popularity cannot be attributed solely to its flashy appearance. Their fiery nature and persistent protection of their mates, nests and young have inspired countless watchers and earned them mascot status at the highest level. From Major League Baseball to the NFL, and Pac-12 to CIAC, Cardinal teams are teams to be reckoned with and have won conference and national titles!

Behaviourally, cardinals are unique creatures. Ornithologists believe the bird’s habit of foraging during low-light periods around dawn and dusk is likely a response to predator avoidance, in which their striking coloration is dampened by such conditions. low light. These monogamous birds are also among the few species to engage in the act of “beak to beak” in which the males feed the seeds to the females. Known for their nurturing nature, cardinals also feed and protect their companions and young with greater attention than most bird species. Tough and beautiful, northern cardinals face a gauntlet of survival threats ranging from starvation and disease to predators and even accidents such as window-breaking. With such threats, cardinals adapt and overcome obstacles, especially during the harsh New England winters. Temporarily abandoning their fierce territorial nature, northern cardinals gather to form flocks called conclaves, colleges, or Vaticans. Such an adaptive social structure allows birds to forage collectively and find food more successfully. Likewise, many pairs of eyes and ears allow cardinals to maintain and improve their vigilance towards potential predators.

Jim Knox is Curator of Education at the Beardsley Zoo in Connecticut and Scientific Advisor to the Bruce Museum. A member of the Explorers Club, Jim enjoys sharing his passion for wildlife conservation with the public in Connecticut and beyond.