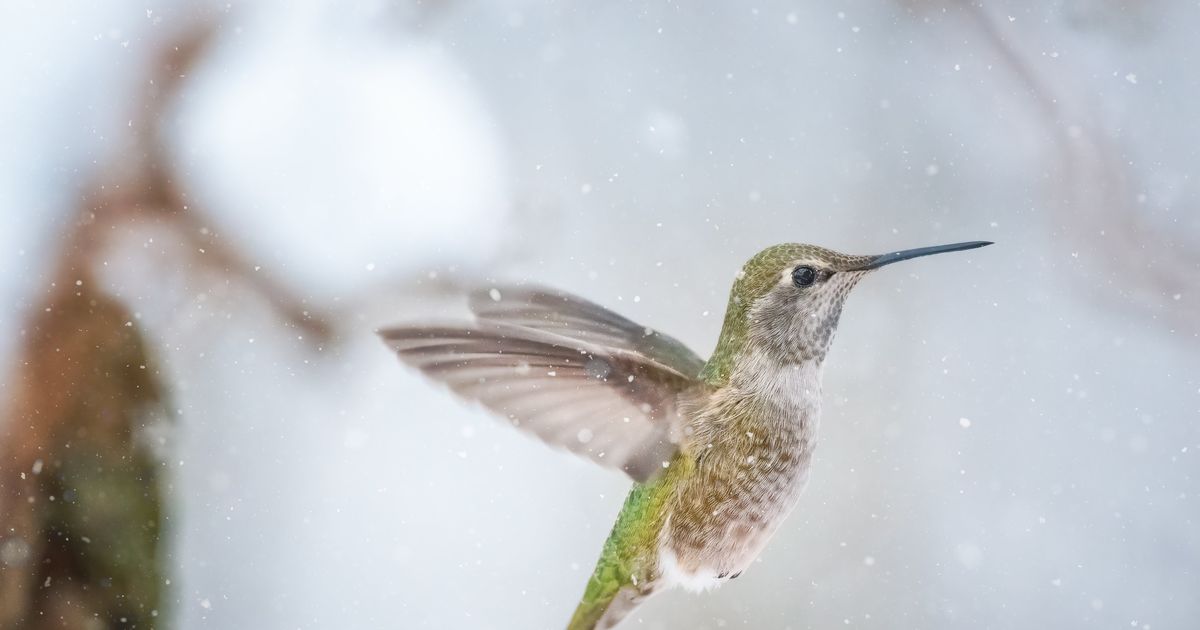 As a wildlife photographer, nature sometimes throws a curve ball at me.

At the end of December, in the countryside of northeast Washington, an Anna’s hummingbird visits our feeder every day, something I have never witnessed in over 50 years in the region.

The species is unusual, as is the moment.

Red, calliope and black-chinned hummingbirds are considered the native hummingbird species to our region. I love to photograph the little whistling wonders, showcasing their colorful personalities and beautiful intricate details that cannot be seen with the naked eye.

This summer, however, a friend identified one of my images as Anna’s hummingbird. The Anna are not native to our region but are common west of the Cascades where they often overwinter. Thinking maybe the identification was wrong, I forgot everything.

Concerned, I contacted regional birding Facebook groups whose members are familiar with the birds of the Pacific Northwest. They said hummingbirds were more common east of the Cascades this time of year and that the feeder needed to be put back in place. So I did, and the hummers kept coming. Then during a cold snap in mid-December and fresh snow, one of them showed up at the feeder.

Twenty years or more of research data shows Anna’s Hummingbirds are rapidly expanding their range from California north to Oregon, Washington State, Idaho, British Columbia and even the Alaska, where they winter in ever increasing numbers. This northward expansion is also happening with other bird species, capturing the attention of scientists.

Over 40 people in the Northwest Interior who have seen my posts have reported similar stories. Thirty-four Anna’s Hummingbirds were reported in the December 18 Special Solstice Bird Count in Chelan and Douglas Counties. Our experience was not an isolated event which made me believe even more in Anna maybe in our area. Experts have many theories as to why this is happening, including climate change, habitat loss, abundant food sources outside their normal range, and human habituation; there is compelling information to support each of these possibilities.

Whatever the reason, we now had a hummingbird at our feeder in December, and I was concerned about the fate of our unexpected winter resident.

Through research, trial and error, we have learned strategies to improve the hummingbird’s odds of survival, which I hope will also help others who care for a late migrating hummingbird. or in winter. With sub-zero temperatures forecast just after Christmas, they’ll need all the help they can get.

Hummingbirds need a constant body temperature of 104 to 108 to survive. They conserve energy and adapt to cold conditions by entering “torpor,” a sleep-like state where they dramatically slow their metabolic rate and lower their temperature to the verge of survival.

The temperature of the nectar in the feeder is important. Even above freezing, the cold nectar can ‘stun’ them, lowering their body temperatures to dangerous levels where they cannot survive torpor or have enough energy to eat the insects they need to survive. in winter.

The optimum temperature for the nectar is 60 degrees if possible. The nectar should be three to four parts water to one part granulated sugar. Any other report can cause health problems for the hummingbirds.

Knowing this, we realized we needed to improve our game to keep the nectar and the hummingbird warm. We have learned that not all feed heaters perform well and that a better designed feed heater is in order. Regularly changing a cold feeder with a cool hot one works well. Bring cold feeders after dark and put them outside at the first light of day.

High-quality brooder heat lights with shatter-proof bulbs (found at grocery stores) keep the nectar near 60 degrees and warm the ambient air around the feeder. Install heat lamps in places near the house where she can find shelter. Be sure to mount heat lamps away from flammable objects.

The actions we have taken have been successful, even at single digit temperatures. Each morning I nervously approach the window overlooking the feeder, hoping the hummingbird has managed to make it through the night. Every morning he appears like clockwork just after dawn, thriving in a place he shouldn’t belong, literally flying in the face of adversity.

I wonder what new knowledge and lessons these birds and their unusual behavior have to teach us. Until then, our winter unicorn continues to bring unexpected joy and wonder, and we celebrate the Anna’s.

Joanie Christian, a freelance naturalist photographer, has lived in northeast Washington for over 50 years.