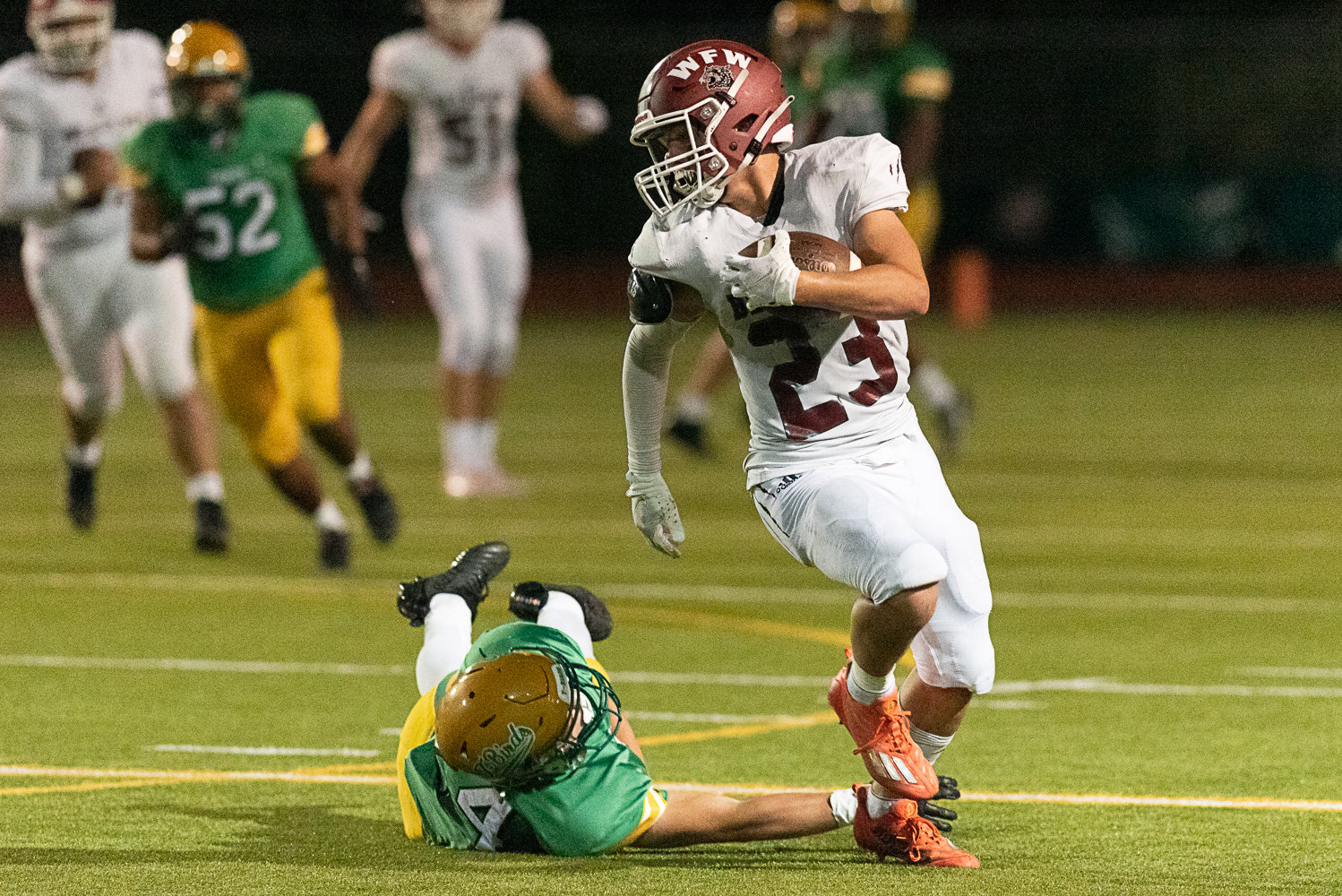 TUMWATER – As Dan Hill sat up, wiped his eyes and looked at the scene around him on Sid Otton Field, his young son came running towards him. Jumping into his arms, little Hill put his hands on his father’s chest, looked up and down, and made the obvious observation:

Hill was indeed. His WF West team – none of which would have been older than his son is now the last time the Bearcats beat Tumwater – became the first Chehalis team to defeat the mighty Thunderbirds since 2009, taking pole position in the 2A EvCo with a 28-7 win that wasn’t as close as the scoreline suggested.

“He was talking to me while we were in victory formation, like, ‘Gage, we’re going straight into the water,'” sophomore Gage Brumfield said.

After the final knee, Lutman — as the lineman has done all night for the Bearcats — led the way. Sprinting to the touchline as the handshake line formed in midfield, he grabbed one of the two jugs of gatorade and knocked them over his coach’s head. A few seconds later, the second followed.

From there, it was all about handshakes, a raucous rendition of the fight song with the Chehalis stalwarts that spilled onto the field after the game, and a post-game coach’s speech. match which was more of a flash mob than a speech.

It was 13 years of catharsis, dressed in white and red.

“It feels good,” senior lineman Daniel Matagi said. “For me, it took four years. For the rest of this community, it means so much more, being 13 years old.

And after an offseason and four weeks of rumble in Lewis County, that maybe – just maybe – this could be WF West’s year, it took eight minutes to set the tone for how things were going to happen.

After moving the chains twice on the Bearcats’ first possession, Gavin Fugate unloaded deep, dropping a penny over Brumfield for a 36-yard gain. Two plays later, Tucker Land came on the sideline and ran 9 yards on third and base to put the visitors on the board.

Tumwater went nowhere on three plays and returned the ball, and WF West went 65 yards on 10 plays, with Brumfield catching a 10-yard tilt to enter the end zone.

Just like that, and WF West had scored more runs than he had on Tumwater since 2015. But the onslaught would only continue.

“It was huge, get off to a quick start,” Hill said. “It’s all about momentum in football, and to be able to come in and have that momentum and carry it for two consecutive terms, it showed me what this team is really capable of, and they’re capable of championship type football.”

With his foot creeping ever closer to Tumwater’s throat, WF West’s offense finally faltered, fumbling the ball deep in his own territory. Three plays later, however, Cody Pennington caught a pass from Ethan Kastner and the Bearcats quickly ran for 97 yards in a minute and a half, scoring on a run from Evan Stajduhar with less than a minute before halftime. to bring the score to 28-0.

Fugate went 15 for 24 — 14 of those completions came in the first half — for 254 yards and a pair of touchdowns. Brumfield had seven receptions for 116 yards, Stajduhar caught five for 69, and Cameron Amoroso was late for Fugate’s other touchdown, getting behind the defense on a 56-yard bomb early in the second quarter.

“We knew we were going to need him, and Gavin stepped up and played a hell of a game tonight,” Hill said. “And our receivers, they played a great game.”

The offense cooled considerably in the second half, but by then the deficit was way too big, thanks to the way the WF West defense was playing.

For the second week in a row, the Bearcats threw a defensive shutout, with Tumwater’s lone touchdown on a Luke Reid pick in the third quarter. The Thunderbirds rushed for just 104 yards, averaging less than 3 yards per carry, despite having possession of the ball for the majority of the second half.

“It’s amazing,” Brumfield said. “I’m proud of our boys up front. They worked. They are crazy and I love them.

Carlos Matheney picked up 61 of those yards, on 15 carries. Quarterback Alex Overbay went 4 for 14 for just 26 yards through the air, with Tumwater’s biggest play on a 34-yard throw from Reid to David Malroy on a bit of trickery.

But all available deception and misdirection could not hide the fact that for the first time since its current players were preschoolers, WF West won the physical battle in the trenches above Tumwater.

“I saw our linemen win us the game tonight,” Hill said. “We knew they could do it, they believed in it, our players and our coaching staff believed in them, and offensively and defensively up front they played a solid game tonight. Without them, we won’t win this. They were amazing tonight.

Tumwater (4-1, 1-1 2A EvCo) will look to bounce back in the home win column against Aberdeen. WF West, meanwhile, will return to Chehalis at 4-1, still unbeaten in the league, with their biggest victory in recent memory to their name to face Rochester.