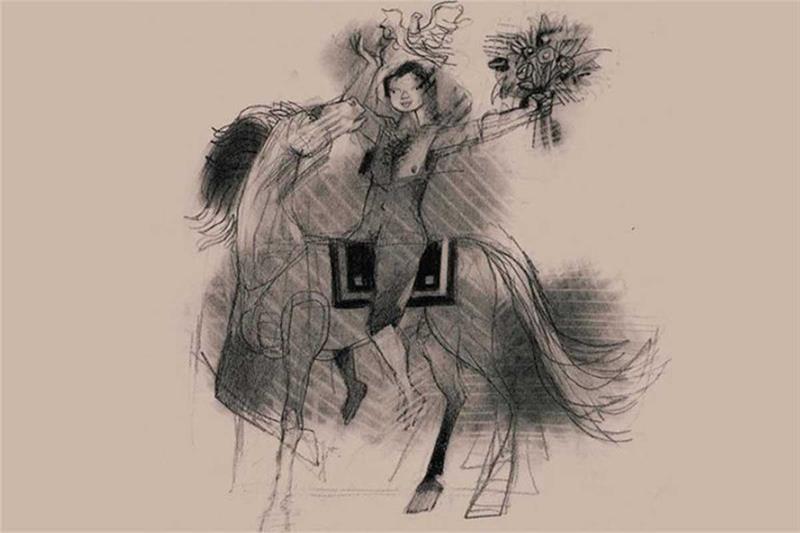 In fact, Jahin and Abdelke are both versatile artists, jack-of-all-trades, extremely cultured without pretense, and neither of them takes themselves too seriously. Both are very involved in people’s lives and in matters of public interest.

“Birds of a feather flock together,” they say. It was therefore quite normal for the second to fall in love with Jahin’s quatrains, which he wrote some sixty years ago.

Similar to those of Omar Khayyam, these short poems carry deep yet playful meanings, and always end with the bewildered exclamation “agabi!” (“How bizarre or unbelievable!”).

Jahin’s poetry has haunted Abdelke for 25 years. They are written in Egyptian dialect and play with the soil of the vernacular, offering a meditation on life, death, the absurdity of passing time and its raison d’être.

In short, it is a poetry of simplicity and hope, finesse and harshness, addressing universal and imperishable themes, tinged with a typically Egyptian humor.

In Abdelke’s large-format charcoal engravings, we find the same reflection on life and death, because they overlap conceptually with Jahin. We find in Abdelke the influence of the German anti-fascist expressionists Otto Dix and George Grosz, who depicted the atrocities of the war, but also the absurd narrative figuration of the Argentinian Antonio Segui.

Abdelke was born in Qamechli in northeastern Syria in 1951. In 1987, he began to create a series of ultra-colored pastels and collages on paper which he called “Figures”.

For a few years he portrayed his people as mangled, deformed, leeches who got rich at the expense of his peoples. This is due to his affiliation with the Communist Party and his political convictions, which earned him 20 years of exile in France.

In 1995, the artist abandoned color, pastel and collages to devote himself to still lifes in charcoal and black and white, often large, with angry stripes and minutely hatched surfaces, adding a filter of light to them.

After the 2011 Revolution, his paintings began to look like tombstones, paying homage to those who lost their lives.

Based in Damascus, where he returned in 2005, Abdelke continues to practice art despite all the inconveniences he encounters.

The exhibition at the Mashrabia Gallery in Cairo presented 35 quatrains by Jahin drawn by Abdelke between 2015 and 2019 and printed in serigraphy.

They all echo the thoughts of the two creators as one simply reaches out to the other – a leftist poet and artist.

A fervent nationalist during the Nasser years, Jahin was very marked by the debacle of 1967. One of his quatrains expresses his disappointment and resonates with Abdelké: “They said that politics is running out of steam in general, O my son, its waters are troubled , nothing to see. do with the softness of ostrich feathers.

“O closed door! When can I enter? I typed for years, and always the same voice came back: Who is it? If I knew, I would retaliate immediately.

Abdelke’s characters arm themselves with patience, lying on the ground or sitting in a café or standing in front of a large padlocked door. Sometimes they are abandoned to their solitude, sometimes they are in the company of a woman, naked or covered. One has the impression of seeing through them or being under their skin. In this mix of his work as an engraver and designer, as usual, no detail is left to chance.

The hatching, the roughness of the parts or the very limited use of red create a certain balance in the work.

The solar disk found on several canvases – including the one illustrating his favorite quatrain – is borrowed from Assyrian and Babylonian bas-reliefs.

It is an “antidepressant” quatrain, addressed to all those who dream of societal change, saying: “It was I who was seduced by the impossible. I saw the moon, so I jumped up. I reached it or not, it doesn’t matter! The main thing is to have contented myself, my heart sated with passion.

Abdelke kept Jahin’s 172 quatrains in drawers for ten years. He knows them almost by heart after rereading them countless times. This is the kind of work that should be left to simmer on low heat.

“I have texts by the Syrian poet Nazih Abu Afach, which I have wanted to work on for 40 years, and those by Muhammad Al-Maghout, which I have kept for 30 years. After creating 45 drawings inspired by Jahin’s quatrains, of which I kept 35, I made 10 others inspired by the poems of the Iraqi Saadi Youssef. However, I didn’t print them, because I think they were very influenced by the quatrain experience,” Abdelke revealed.

On the one hand, it was necessary to find a good screen printer capable of transferring the designs to a screen print using screen printing and ink while preserving the nuances and gradations of tones. And on the other hand, he himself had to translate the profound lightness of Jahin.

“The funny and light side of the latter is not easy to convey. He has the ability to express human tragedy without making us sink into the dark. Enough to make us accept his words despite their overwhelming nature,” continues Abdelke, who has divided his exhibition into five groups devoted to five creators who have marked him, including three Egyptians.

“Since my youth, my references have been mostly Egyptian. I read literary works, the books of Ramses Younane (an Egyptian surrealist artist and one of the founders of the Art et liberté group) and the writings of Hassan Soliman on the plastic arts, which I discovered before his magnificent paintings,” says Abdelke.

Each of these artists encourages him to rebel, to break artistic and aesthetic codes, to break taboos, to renew, to experiment, moving from one discipline to another.