The Caroni Swamp is a 12,000 acre swamp located on the west coast of Trinidad. Join an excursion for a guided boat trip and spot the Scarlet Ibis (Eudocimus ruber), the spectacular flame-colored birds, as they descend on the trees in large flocks.

Caroni Swamp is the second largest mangrove wetland in Trinidad and Tobago. It is located on the coast of Trinidad, south of Port of Spain and northwest of Chaguanas, where the Caroni River meets the Gulf of Paria.

The marsh is an estuarine system comprising 5,611 hectares of mangrove forests and herbaceous marshes, interrupted by numerous channels and brackish and saline lagoons, and with extensive intertidal mudflats on the seaward side.

The cthe central section of the area is designated as a wildlife reserve and is home to one of Trinidad and Tobago’s national birds, the scarlet ibis, which uses the Caroni Swamp as its main resting place. The marsh is also home to over 100 bird species. 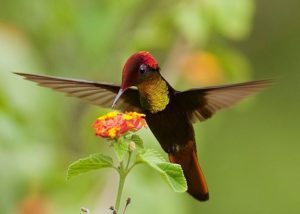 The Caroni Swamp has a total of 20 endangered species and is ecologically diverse. It offers a variety of habitats for flora and fauna. Caroni Swamp supports rich biodiversity. It is a very productive wetland that provides food (biological production) and also provides protection. It is also a nursery for marine and freshwater species. If you like ecotourism, Caroni Swamp is a must visit.

What’s a garden without birds? Create habitat for them to thrive