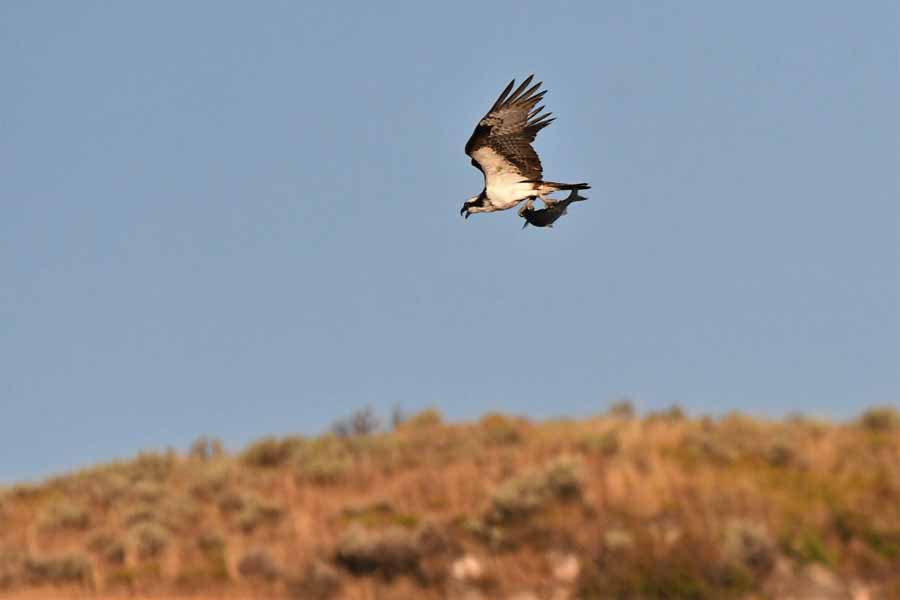 Clash of osprey and eagles at Ririe Reservoir

“Kur-splash,” I heard as I parked my truck at the Juniper boat launch in Ririe Reservoir on Tuesday morning. In the pre-dawn light, I could barely make out the osprey as it struggled to take flight with a fish in its talons.

Of course, the successful fisherman had to brag about his success, and like most ospreys do, he let out a victory cry and within seconds six eagles were chasing him. Accompanied by three mature and three immature bald eagles, the osprey dropped the fish and when it hit the water one of the adults picked it up. It was the first of seven fish harvested by ospreys that eventually ended up in the bellies of eagles.

It appeared that adults taught immatures to be thieves by chasing ospreys until the fish were released. Only one of the seven fish was picked up in the air by a mature eagle because three attempts by the immature ones failed, but they picked them up from the water.

When an adult stole a fish, it took it to a mudflat on the west side of the reservoir where up to nine immature birds awaited delivery. It reminded me of Walmart employees who did grocery shopping for non-shoppers. Even gulls got in on the action chasing ospreys when they caught a fish and immature eagles when they stole a piece of rotten fish from noisy birds.

By the time the sun rose, there were 24 eagles in the air, most near the dam. Kokanee spawning is almost complete and as the fish died, up to 40 eagles showed up for easy pickings.

“About 10 days ago we saw thousands of ‘reds’ swimming to the surface as they died,” my friend, Kent Lundin, told me on Monday as we watched ospreys and eagles. “You could have had fun photographing them.”

But Monday’s kokanee skunk day for us convinced me to be at the reservoir early morning Tuesday. Ospreys were catching both kokanee and trout just below the surface at sunrise. But at 9am they became less active and I didn’t see any fish caught from 9am to 10:30am when I left. As the sun pushed the fish from the surface and below the reach of the fish hawks, the eagles would position themselves on cliffs or trees overlooking the water waiting for the fish to come to the surface. Even the young eagles headed for the cliffs and trees.

On Monday around 10:30 am we saw seven eagles chasing another eagle that had found a fish somewhere. While he ate the fish, the other eagles gave him some space to enjoy the meal.

The eagles will soon disperse to other food sources, leaving Ririe Reservoir for ospreys to enjoy before migrating south. The pair of golden eagles, with a youngster, were high on the cliffs opposite the floating toilet near the power line. But we did not see them participating in flight operations.

I wish I had been in Ririe a week or two earlier to watch them, but I had great entertainment the two days I watched them.

From my observations, many hummingbirds have migrated as well as most of the warblers, but we are approaching the Swainson’s hawk congregation before they move south. Plus, it’s time to try and appreciate the slab of elk as they enter their rut. Hopefully the heat will moderate soon so we can enjoy the great outdoors in cooler temperatures.

Fishing on the region’s lakes and reservoirs should also improve.

Where are all the best dressed pets in the state of Ohio? : We want to see them, send us your photos