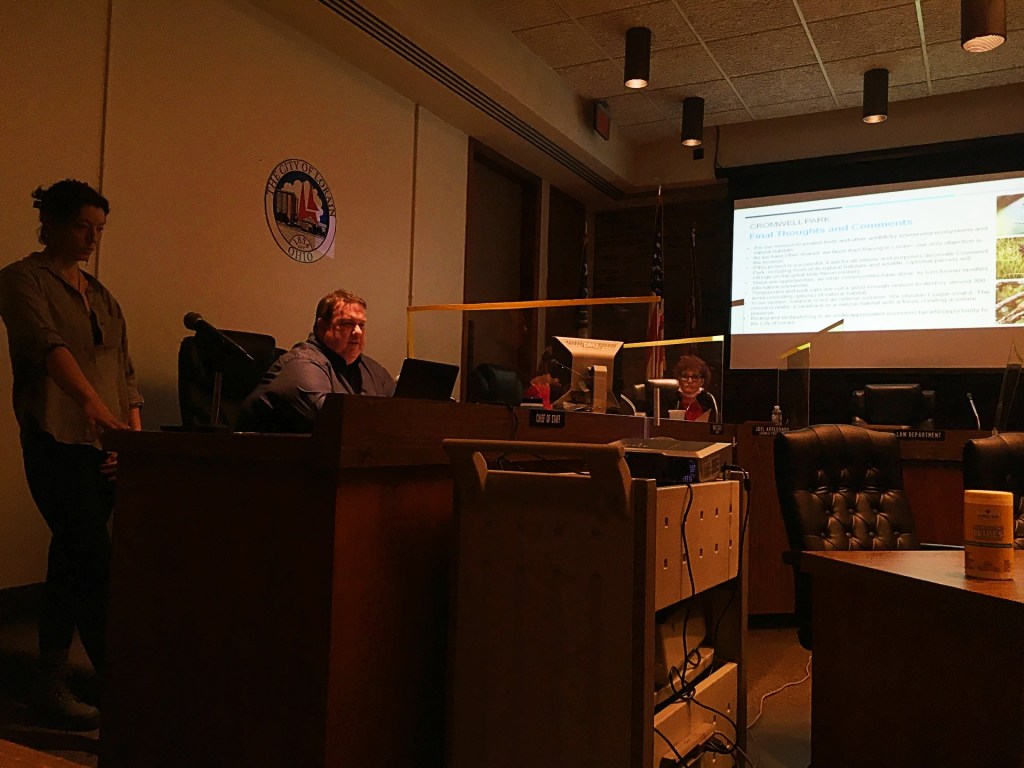 On February 14, members of the The Black River Audubon Society argued its case before the Lorain City Council Buildings and Grounds Committee.

Society president Rob Swindell and its conservation committee chair Danielle Squire opposed a zoning change that could allow the new Ohio Motorsports Park to be built on land between Colorado Avenue and Black River.

“Please know this is tough for us,” Swindell said. “It’s about our passion, our passion for birds. We like, as I mentioned before, some of the things the town of Lorain does. In fact, we love this project, our objection all the time comes from the location of this project.

The Black River Audubon Society was formed in 1958 and now has more than 550 members dedicated to education, conservation and advocacy, Swindell said. Some say the members are “crazy people,” but a number of professionals make up the members and the board, Swindell said.

The area around the mouth of the Black River, from Lake Erie upstream past the confluence with French Creek and south to Elyria, is considered an Important Bird Area by the Audubon Society.

It’s one of 66 in Ohio where the landscape is large enough to support a population of one bird species but small enough to be preserved in its entirety, according to the organization’s criteria. Important Bird Areas are a science-based designation and assessment that aim to conserve birds and the habitat they need to survive, said Squire, resident naturalist at Lorain County Community College.

Cromwell Park is popular with birds and people, she said.

Squire highlighted how birds are part of the collective web of life and an indicator of a community’s environmental health.

There are examples of landfills in Cleveland and New York that have been turned into natural areas, they said.

The meeting included several comments from the public.

Kathleen DiTullio of Oberlin spoke about the kart racing complex and the potential effects on the colony of great blue herons that is established on the opposite bank of the Black River. Members of the Audubon Society and race track developers have come up with different measures of the distance between the two sites.

The town of Lorain has received millions of taxpayer-funded dollars for the ecological restoration of the river and its banks.

“You’d think the taxpayers and federal officials who funded the tens of millions of dollars in habitat restoration funds didn’t envision a big, noisy race kart track in the middle,” DiTullio said. “The city of Lorain did not provide these tens of millions of dollars for the restoration. We, along with all taxpayers in our country, have done so, and we have every right to strongly disagree.

The area is called Cromwell Park, but that is a misnomer, Ward 1 Councilor Beth Henley said. It’s owned by the city and served for years as a dumping ground, but it’s not a publicly accessible park, she said.

Over the past month or so, the group has given council a better understanding of environmental stewardship, Ward 6 Councilor Rey Carrion said.

Conservationists are calling for a balance between green space and development, but not for land that was a problematic dump, Carrion said. He gave examples of industry in Lorain relying on Black River and city cooperation with the Port Authority of Lorain and the Environmental Protection Agency to protect the waterway.

“I respect your position, but I also believe there has to be a balance and I don’t believe that balance is what you’re looking for, not on this site,” Carrion said. “You are looking for balance elsewhere but not on this site. And personally I can’t support that, I won’t stop progress where there is an intention to strike a balance and develop a project that will be sensitive to nature and stop it just because of your position, which I fully respect but do not support.”

Ward 4 Councilman Dan Nutt said he supports the motorsports park. But he thanked the group and said he appreciated the hard work, passion, effort, information and bravery of Audubon Society members to make a presentation to the Board.

the the full meeting can be viewed at cityoflorain.org.