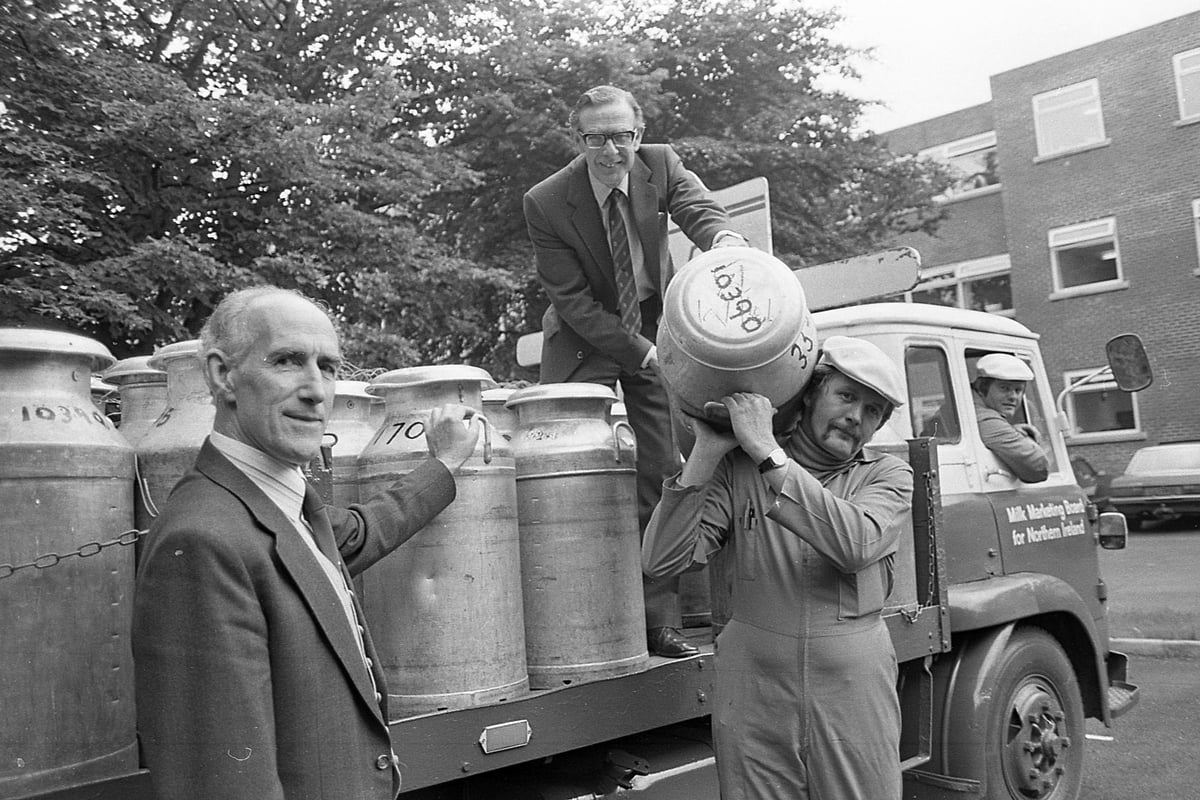 Fred reminisces about his past farming days

I was delighted to hear from Fred and only happy to include his memories in this week’s page.

“I was a member of Cookstown YFC then and we joined a team in the poultry section.

The Milk Marketing Board, at the end of June 1982, cut its last ties with an era. The familiar sight and sound of the milk truck, complete with the clanking of cans, has finally gone, as the last of the fleet used for collections from farmers has been handed over to the Ulster Folk and Transport Museum. The truck, first registered in 1965, had been used in the Enniskillen area, with milk delivered to the West Ulster Farmers’ Co-Operative in Irvinestown. Mr Terry McLaughlin, left, Director of Agricultural Services for the Milk Marketing Board for Northern Ireland, presenting Mr George Thompson, Director of the Ulster Folk and Transport Museum, with the last of the council’s milk collection trucks , assisted by drivers Andy Moore and David Stephenson. Image: Newsletter Archive

“Unfortunately I was only able to recruit two other members to take part, so I persuaded a student from Loughry Agricultural College to put together the team of four

“The females to be judged were classed as ‘Purebred White Leghorns’, usual ABX Y markings.

“When our turn came to do our deliberations, Mary was called first.

“After doing her rankings, and emerging, she managed to whisper ‘Look carefully under X’s wing’. I managed to discreetly pass it on to our other two members.

“By the way, X was a first class bird, but hard to see the black feathers hidden under a wing, so we all put X last.

“When Mary was called to give her reasons for her ranking, she first told the judges that I understood we had to judge a paddock of Pure Bred White Leghorns, why was a cross being included, so naturally I placed it last.

“Everything stopped and he was asked to come out. We were all up for twenty minutes or more and other clubs as well as ourselves were puzzled as to what was going on.

“Through the vine later in the day we found out the judges had readjusted their rankings. Cookstown YFC came home with winners certificates.”

In another memory from 1947, Fred recalls: “It was a sweltering afternoon in late July 1947, when this saga which I remember so well took place. At Annaghteige Farm, outside Cookstown, my father was harvesting a three-acre field of Italian ryegrass. The mower was a two-horse-drawn McCormack with a four-foot cut.

“I drove the horses, ‘just old enough to do it’ and my father sat perched on another seat next to me, shaving the piles of cut grass. At that time we had a servant and a maid, necessary for the main business of the farm which was then large flocks of free-range poultry As I said, it was a hot but sultry afternoon about 3 p.m. when a well-dressed man appeared at the entrance to the field. Coming back to cut another strip, my dad stopped to ask what he wanted, and I can still see my dad’s face on his answer. I’m from the Ministry of Agriculture and I came to ask you what wages you pay for your work.

“I must add that my father was generally a gentle-tempered man, but wiping the sweat from his face he said can’t you see I’m here up to my eyeballs, trying to finish this field, throw a look at this sky, the time will break, and I don’t have time to talk to ‘You’.

“With that, the man left and we resumed work. About an hour later the man reappeared, this time wanting to know what time we stopped for a bite to eat. Before my father could give free rein to his thoughts, the man said “let go of the horses and take a break around 6 o’clock”, then he turned and left.

“As it happened, my mother had come in around half-past five and brought the wicker basket containing bread and tea in the usual enamel box. We had just finished a quick ‘al fresco’ when the same man returned this time accompanied by two other men and two women.

“I still remember how skilled these people were at tying ryegrass and within hours the field was cut and sown.

Samantha Prentice landed this jump on her pony Small Order in the 128cm class (A, B, C) at the Saintfield Show in June 1982. Photo: Farming Life Archives/News Letter

“While my father was tending the horses, visitors were brought into the house and, if I remember correctly, I enjoyed bread, butter and tea baked at home by my mother.”

Do you have to go to church to be a Christian?