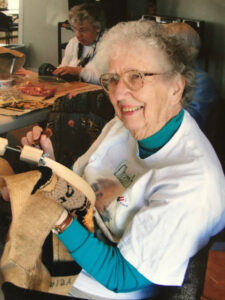 Glenna Barkan, 94, died on March 22, 2021 at Linden, an assisted living facility in Dedham, where she spent the last 16 months of her life.

She was born Glenna Frances Kelley on July 30, 1926 in Amesbury to Rex and Helen Kelley, who instilled in her a love of birdwatching and baseball. As a girl, she was an avid reader, played the piano, and was a frequent moviegoer, dating weekly or more, racking up a impressive collection of autographed photos of movie stars. She grew up skiing “Po Hill” with her younger brother, David, and was active on his basketball team, the Amazons. She worked at her grandfather’s pharmacy and soda fountain, and had a job assembling walkie-talkies during World War II. After graduating from Amesbury High School in 1944, Glenna attended Jackson College for Women, Tufts Coordinated University, where she majored in English, but admitted to spending much of her time there playing football. bridge, knitting, dating and exploring Boston.

A graduate of Jackson in 1948, she met her future husband, Benedict Barkan, in November of that year during an alumni trip with the Tufts Mountain Club in New Hampshire’s White Mountains. Ben and Glenna married in Amesbury a year later, honeymooning in New York City over the Veterans Day long weekend.

Glenna’s first professional job was teaching at Massachusetts Hospital School in Canton. Ben’s job as a traffic engineer took them to Providence, RI, then Syracuse, NY, where children Chris and Susan were born, followed by a move to the New Haven, Connecticut, s area. settling in the town of Branford, where his daughter Sally was later born. They would live in Branford for over 45 years.

Glenna and Ben enjoyed gardening as well as hiking, camping and skiing all over New England. They belonged to the Seaside Swingers square-dancing club, were active in the Branford Folk Music Society and Trinity Episcopal Church, where Glenna sang in the choir and volunteers much of his time. They were avid theatergoers, notably as subscribers to the Long Wharf Theater in New Haven for over 25 years, as well as the Goodspeed Opera House. Later, they made many long road trips across the United States in their small recreational vehicle.

Glenna’s greatest joy was her children. She was a devoted and involved mother, serving as a Girl Scout troop leader and support mother for the swim team. She loved children, in general – always a welcoming host with an open-door policy towards her children’s friends and the neighborhood.

She would work as a faculty assistant at the Yale Child Study Center and for the Branford Review newspaper, writing a beloved weekly column for the Indian Neck neighborhood for years.

Glenna’s sense of service to her community was a value she lived throughout her life: giving back through service projects at Trinity Church, the Branford Garden Club, as a troop leader in Girl Scouts, volunteering for the AIDS New Haven Project and the Branford Land Trust, to name but a few some.

Glenna had always done manual work: knitting, sewing clothes for her children and herself, but in the late 1970s she was introduced to quilting, which would become a lifelong passion. She was a prolific quilter, making countless quilts for family and friends, for donations and for fundraising raffles. Glenna also led a project to create Branford’s historic quilt, in honor of the town’s 350th anniversary in 1994.

Ben and Glenna started coming to the Vineyard in 1979 for vacations, buying a condo in Hidden Cove in 1993. In 1997 they bought their house on Pondview Drive in Oak Bluffs. They split their time between Connecticut and the vineyard, spending more and more time on the vineyard until November 2003 when they moved here full time.

Glenna, as usual, has been very involved in her new community: she joined the Island Community Chorus, swam early mornings with the Polar Bears in Oak Bluffs, volunteered at COMSOG, Felix Neck and St. Andrew’s Episcopal Church, joined in knitting and needlepoint. groups and start a quilting group at Oak Bluffs Senior Center. She was teaching quilting and leading the group in making raffle quilts to raise money for fuel aid, taking the quilt around all the street fairs and the agricultural fair to sell tickets, raising thousands of dollars for those in need. She received an award as Cape Town Senior of the Year for her work. Eventually, the quilts gathered in members’ homes and made and donated dozens of quilts for children and babies to the Red Stocking Fund.

When Ben died suddenly at the end of 2004, it was devastating for Glenna. However, she would eventually rally around and return to her lifelong involvement in community, service, stamp collecting and her endless curiosity about the world.

Sister of the late David Kelley of Manitowoc, Wisconsin, she is survived by her children, Christopher Barkan and his wife, Libby, of Champaign, Illinois, Susan Barkan of Seattle, Washington, and Sally Barkan of Roslindale, grandchildren Charlotte, Phoebe and Eliza Barkan; nieces Heidi and Moira Kelley; great-nephew Henry Creedy; and her beloved cat, Peaches.

His ashes will be buried in Oak Bluffs, next to Ben.

A memorial service and reception is scheduled for Saturday, March 19 at noon at St. Andrew’s Episcopal Church in Edgartown. Everyone is welcome!