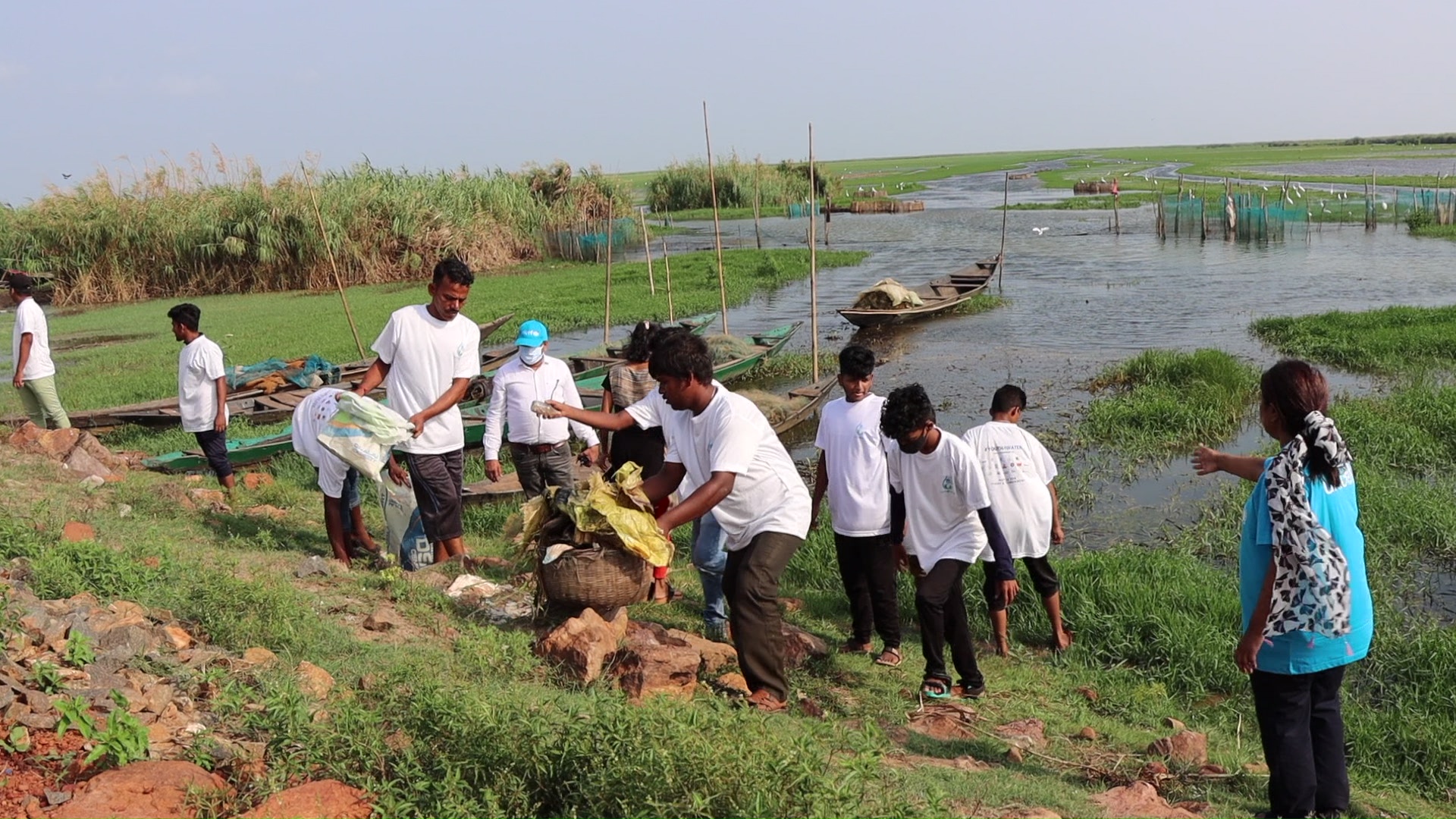 Srinivas Behera’s family in the village of Mangalajodi on the northern shores of Chilika Lake in Odisha, along India’s east coast, have been engaged in the fishing business for as long as they can remember. His father was a fisherman and also hunted a migratory bird or two during the peak winters when the flocks arrived, mostly for home consumption and sometimes with the intention of selling. Later he worked as a middleman, taking catches from fishermen and reselling them to traders.

The Mangalajodi wetland – restored in 1991 with the establishment of Chilika Development Authority (CDA) – provides a wide range of ecosystem services and rich biodiversity Support multiple livelihoods for the people of Mangalajodi, such as fishing and tourism. The wetland, which covers 10 km2, is part of the Chilika Lagoon, one of the six Ramsar sites in Odisha and has been listed as an Important Bird Area (IBA). In 2000, the marine flow of Chilika Lake was restored by opening a new mouth in the Bay of Bengal and, according to a report, this hydrological intervention has led to a resumption of fish landings and an increase in the number of Irrawaddy dolphins, which has revived tourism prospects in the region. As local communities shifted from illegal hunting to tourism and related livelihoods, annual income increased 2.5 times between 1995 and 2014.

When Behera, now 30, grew up, he also wanted to work in his village and took professional training to become a tourist guide. In winter, when the area saw a tourist influx of almost 5,000 people, he accompanied tourists and researchers in a boat as they took a ride through the shallow channels of the Mangalajodi wetlands, lighting them up with his rich knowledge of the birds, their scientific names and their characteristics. In the summer, when the influx of tourists was limited, he worked as a television mechanic.

But when the COVID-19 pandemic hit, the complete shutdown impacted the tourism industry and deprived Behera of revenue opportunities. He was forced to migrate to Chennai in the southern Indian state of Tamil Nadu to work as a day laborer.

“I was reluctant to migrate to Chennai, but there were no options here. Through a contractor, a few villagers and I went there and worked as house painters But the payment and the living conditions were so appalling that I came back a few months later,” says Behera.

He returned to take over the shrimp business his father had started, but which was also suffering losses due to poor marketing. Behera then reached out to representatives of Youth4Water, a campaign supported by UNICEF, which engages with local youth to mobilize them to WASHING (Water, Sanitation and Hygiene), climate action and also support for livelihood opportunities.

They have helped Behera market his product and the added value has helped him establish land for his product which he wants to develop into a small rural business.

In Mangalajodi and outlying villages, which depend on wetlands for their livelihoods, several initiatives are emerging to build resilient communities as human-induced climate change and other anthropogenic activities impact the health of wetlands and related livelihoods of people.

“The surface of wetlands is warming and the ecosystem is in transition. The frequency of heavy and extreme rainfall also increased periods of salinity. As the Mangalajodi ecosystem is frequently exposed to climate change, people’s livelihoods have become slightly unpredictable,” said Ritesh Kumar, Director (South Asia) of Wetlands International at Mongabay-India.

The family of a local resident, Vivekananda Das, who lives in the nearby village of Bhusandpur, had been involved in making bamboo handicrafts from the grass abundantly available in the lake. However, the higher salinity over the years, it is difficult for the family to get the right raw material for the product. The family business gradually declines.

“Most of the families in our village used to make bamboo items like mats and handicrafts from the grass taken from the wetlands. But over the years the quality got worse and you had to venture deeper into the lake to find the right quality. The cost of production has increased, prompting villagers to stop making these products. Even in my family, only my mother makes bamboo mats,” says Das, who plans to work in a city soon.

Although there is no official data available on the number of migrants from Mangalajodi to other states, restoration efforts over the past two decades have benefited locals and are stopping migration. Several stakeholders have joined the CDA or are undertaking initiatives at the individual level to enhance livelihood opportunities for young people and prevent labor migration.

The NGO Wild Orissa, which has worked with the people of Mangalajodi since the late 1990s, also has specific programs for young people. They are mainly involved in training on bird identification, approaching guests and promoting ecotourism in the area to attract more visitors.

“It is easier to work with young people because they are more active and effective in learning quickly. We have about 30 to 40 members, mostly young people, who run eco-cottages in Mangalajodi. Now we plan to launch residential training for students and young researchers who would study conservation at Mangalajodi and suggest ways to improve the health of the wetland,” said Shivaji Nayak, Secretary of Wild Orissa.

UNICEF’s Youth4Water engages young people in Mangalajodi in activities that build ecosystem resilience. The campaign initiates weekly cleanliness campaigns around tourist sites in the wetland area as well as a training session where young people are trained on visual cues including certain bio-indicators to diagnose water body problems .

Water level restoration and quality management are also included in the sessions. The campaign also provides entrepreneurial support to young people by connecting them with related markets and also contributes to the added value of their projects.

“Apart from this, we regularly engage with young people who are involved in tourism and help them address pollution issues due to increased tourism activities,” says Shreyash Subudhi, COO, PANTISS, partner of Youth4Water.

The campaign recently absorbed a 23-year-old Babul Behera from the village of Mangalajodi, who had migrated to the southern Indian cities of Chennai and Hyderabad to work with Srinivas Behera. Babul’s family was embroiled in a long legal family dispute, for which his father, a fisherman, had exhausted all his savings, prompting Babul to move to other towns in search of employment.

“I worked as a day laborer in different towns to supplement my family’s income. But I came back because the money was barely enough to support me,” says Babul.

A recent report by the United Nations reported that nearly five million people were internally displaced due to climate change and related disasters last year. Also on the coast of Odisha, there have been several instances of climate-related migration in the past. The Satabhayas, a group of villages in Kendrapara district of the state were relocated and rehabilitated due to the sea entrance.

However, there are no specific local-level data that trace migrations related to climate threats.

“The first step to solving the problem would be to create a database of people migrating due to climate threats at the panchayat level. Emphasis should be placed on reducing cases of distress migration and on a specific climate-related displacement policy. Training young people will also help solve the problem,” said Umi Daniel, Director, Migration and Education, Aide et Action International at Mongabay-India.

Alternatively, some experts also believe that migration, when safe and dignified, can help reduce stress on the ecosystem.

“A balanced view of wetland migration would be to look at the population growth scenario. As the population grows, the ecosystem will need to accommodate more activity. Safe migration can always help take the stress out of the system,” says Kumar of Wetlands International.

Read more: [Explainer] What are wetlands and why do we need to protect them?

WILD THINGS: THE WORST BIRD DOG IN THE WORLD