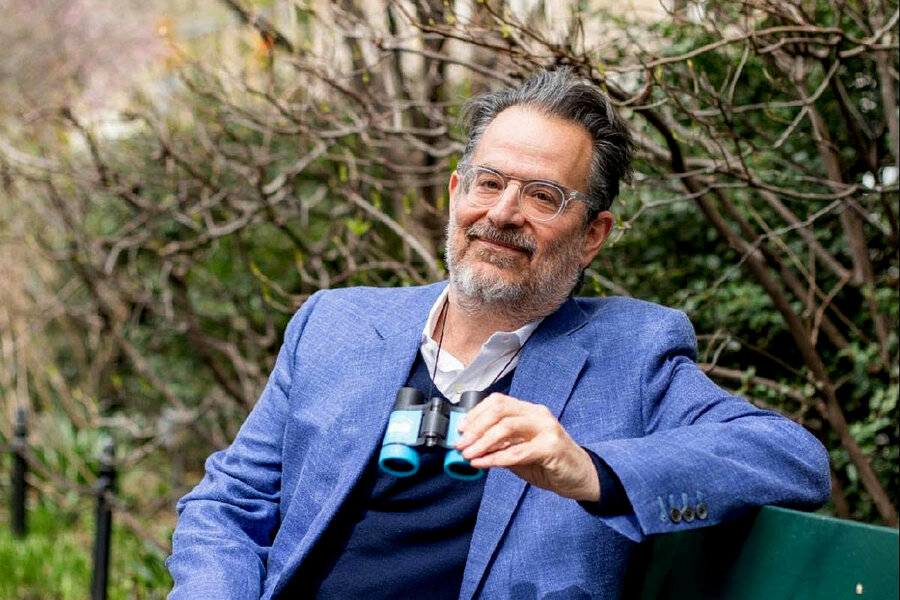 Music project ‘For the Birds’ seeks to celebrate and save birdsong

At the height of the pandemic, Randall Poster found solace in birdsong. As the musical supervisor of some of Hollywood’s most prestigious directors, he is used to listening to melodies. But he hadn’t paid much attention to the music of nature.

The more he noticed the birds and their songs, the more he realized that climate change threatened both. Then, a colleague, Rebecca Reagan, had an idea: Mr. Poster could invite notable musicians to create music built around the chirping of birds. The result, produced in conjunction with the National Audubon Society, is “For the Birds: The Birdsong Project.”

Why we wrote this

The beauty that surrounds us can be a source of inspiration, if we pay attention to it. A new musical project hopes to bring that kind of attention to birds and birdsong – and to the preservation of both.

Thirteen hours of music featuring a wide range of musicians, the 20-LP box set will be available in the fall. For now, the tracks are being released on streaming platforms, in the hopes that they will encourage people to listen to nature – and preserve it.

The universality of bird sounds explains why “For the Birds” encompasses so many musical styles, from minimalist composer Terry Riley, to jazz saxophonist Kamasi Washington, to hip-hop artist Wale.

“For the Birds” also includes a partnership with eyewear retailer Warby Parker for a range of inexpensive binoculars for underserved children.

“It feeds another generation … of concerned people,” says Mr. Poster. “Ultimately, I think that will be the legacy of the project.”

Randall Post spends many hours every day listening to music. It’s his job. Some of Hollywood’s most prestigious directors – Martin Scorsese, Wes Anderson, Nancy Meyers – hire him to choose the perfect songs to pair with scenes in their films, so the Music Supervisor is on a constant quest for remarkable melodies.

Then in 2020, Mr. Poster discovered something extraordinary. The New York resident heard something he had heard countless times but paid little attention to. Its emotional resonance floored the man with the golden ears.

It was the sound of birds.

Why we wrote this

The beauty that surrounds us can be a source of inspiration, if we pay attention to it. A new musical project hopes to bring that kind of attention to birds and birdsong – and to the preservation of both.

“During this dark moment of the pandemic, when we didn’t know what was in store for us, … you look out the window and nature goes on,” Mr. Poster says on a Zoom call. “I found a lot of comfort in the birds vocalizing and sort of saying, ‘We’re here. We always sing.

As Mr. Poster’s newfound interest in avian life grew, he became more aware of how climate change threatens birds. A colleague, Rebecca Reagan, had an idea: Mr. Poster could invite notable musicians to create music built around birdsong. The result, produced in conjunction with the National Audubon Society, is “For the Birds: The Birdsong Project.”

The big idea behind the project? Take the listener out of his noisy daily routine so that he becomes more aware of his natural environment. The more we appreciate it, the more we will strive to preserve it.

“For the Birds”, with 174 new music tracks featuring birdsong, was released in conjunction with the National Audubon Society. It encompasses a variety of musical styles, from minimalist composer Terry Riley to jazz saxophonist Kamasi Washington to hip-hop artist Wale.

“The world is more than people,” says Jonathan Meiburg, frontman of Shearwater and author of “A Most Remarkable Creature: The Hidden Life and Epic Journey of the World’s Smartest Birds of Prey.” “It’s very difficult to adjust to the world of birds and not start adjusting to…thinking about other life forms on this planet.”

“For the Birds” is a dizzying 13 hours of music and features musicians such as Nick Cave and Warren Ellis, Elvis Costello, Beck, Beach House, The Flaming Lips, Cassandra Jenkins and Jeff Tweedy of Wilco. A box of 20 LPs will be available in the fall. In the meantime, the tracks are released in batches on streaming platforms.

Mr. Meiburg’s band provided an instrument with an evening chorus he had recorded on a high sandbar overlooking a bend in a river in the jungles of Guyana. Mr. Meiburg also wrote an essay for the box, which he likens to an ecosystem. Indeed, interspersed between the music are poems and short stories read by actors Robert Pattinson, Greta Gerwig, Regina King, Maggie Smith and others. The spoken word pieces add to the meditative feel of the whole thing, says Poster.

The band Calexico, consisting of Joey Burns and John Convertino, also wrote a new song for the project. They have already recorded several songs inspired by birds. In the spring of 2021, the duo were staying at a friend’s beach house in the Willapa National Wildlife Refuge in Washington state – “the right place at the right time to record music for this project”, says Mr. Burns. by email. He spotted a couple of hitchhikers in the rain walking near a great blue heron that was “strutting along the shore.” The image inspired him to write lyrics to accompany a swampy, distorted guitar pattern.

“I love how Randall involves people in his projects, and ‘For The Birds’ is one of my favorites we were asked to participate in,” says Burns. “My family is always on the lookout for wildlife and ways to preserve nature.”

Brooke Bateman, director of climate science at the National Audubon Society, hopes “For the Birds” will inspire people to get out, even if it’s just in their backyards, and listen.

Brooke Bateman, director of climate science at the National Audubon Society, says bird sounds often connect us to memories of a place. For Dr. Bateman, the lugubrious call of the common loon brings her back to her grandparents’ cabin in northern Wisconsin. A 2019 Audubon report, “Survival by Degrees: 389 Bird Species on the Brink,” included the loon among birds threatened by range loss and potential extinction due to climate change. The biologist hopes “For the Birds: The Birdsong Project” will inspire people to get out, if only in their backyards, and listen.

“It’s time to be inspired to act, because the birds tell us it’s time to act,” says Dr. Bateman. “You see ‘389 birds’, that’s a number, that’s a statistic. But if you sort out what each of those species are, a lot of us are connected to those birds and the places they connect us with. .

The kinship between man and the birds of the sky has long been expressed through music. For example, Ludwig van Beethoven’s 6th Symphony simulates a cuckoo with a clarinet, a nightingale with a flute, and a quail with an oboe. The Beatles included the chirps of a black-billed magpie in “Blackbird.” In her 2005 song “Aerial Tal,” Kate Bush mimics the language of birds in a duet with blackbirds. The universality of bird sounds explains why “For the Birds” encompasses such a wide range of musical styles, from minimalist composer Terry Riley and jazz saxophonist Kamasi Washington, to hip-hop artist Wale and Japanese singer Hatis Noit.

Mr. Post conjectures that mankind’s first music may have been an imitation of birds.

“I certainly didn’t invent the idea of ​​incorporating birdsong into man-made music,” says Mr. Poster, who also credits the success of “For the Birds” to the efforts of Ms. Reagan and from fellow executive producers Elliot Bergman. , Stewart Lerman and Lee Ranaldo. “But right now I felt like it was something that was a timely tribute. And people, I think, are trying to live a little more consciously than maybe they did before the pandemic. .

The latest installment of “For the Birds” is a partnership with eyewear retailer Warby Parker. Mr. Poster asked the company to create a range of inexpensive binoculars to distribute to underserved children in public schools. He hopes to inspire children to become ornithologists. And adults too.

“It feeds another generation or two of concerned people,” says Mr. Poster. “Ultimately, I think that will be the legacy of the project.”