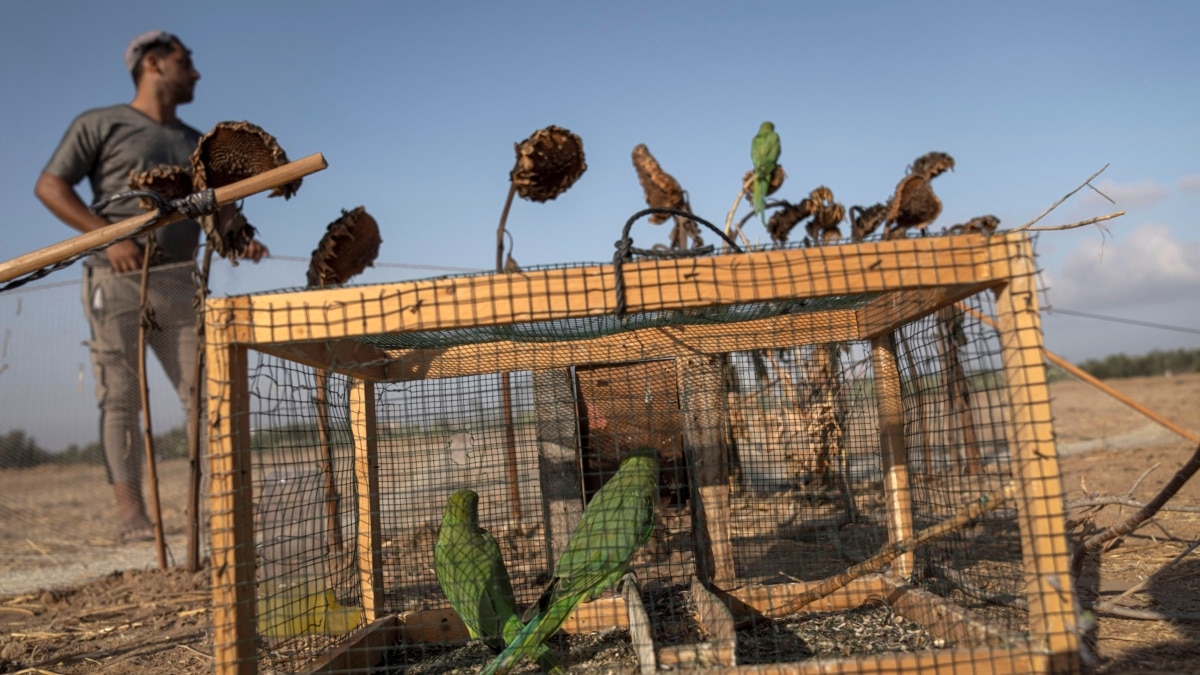 In recent years, Palestinians have taken up bird trapping, or more specifically, parakeet trapping. Hunters earn money by selling the birds as pets. The business is a rare source of income in Gaza, which has been under an Israeli-Egyptian blockade since the Hamas group took power 15 years ago.

The Rose-ringed Parakeet is an invasive species of tropical bird that has spread to Israel and the Palestinian Territories. The light green birds with red beaks were most likely first brought to the area as pets.

In Gaza they are popular as in cage songbirds.

Khaled al-Najjar is a trapper and father of two children.

Al-Najjar said of the parakeet: “It is a beautiful bird, and everyone loves it…I catch them to earn a living and feed my children.”

The birds live on Israeli farms. But when the workers enter the fields, the birds fly over the border fence into Gaza. Palestinian trappers on the other side of the fence catch them in nets and other traps.

The work can be dangerous.

Israel has established a 300 meter zone called a buffer zone along the fence. Israeli forces closely monitor the border for possible Palestinian invaders.

Israel and Hamas have fought four wars and several small battles over the years. Earlier this month, Gaza was the scene of three days of heavy fighting between Israel and forces of the Islamic Jihad group.

Once the trappers capture the birds, they return to the overcrowded towns of Gaza, where they sell the parakeets to pet stores. Al-Najjar says he gets around $10 for two parakeets. In some pet stores in Gaza, a pair can sell for twice as much.

There are few rules governing the bird trade in Gaza, where unemployment is around 50%. Bird trapping has greatly reduced the local population of swallows and quail, as well as native species such as goldfinches.

By trapping the parakeets, the hunters could be of service to the region. The population of invasive parakeets and mynas – a bird in the starling family – has exploded over the past 15 years.

The growth of invasive species has been added to a decline in the populations of local species such as the house sparrow and the white-spectacled bulbul.

In 2019, Israeli researchers published a study that looked at data on bird populations. They found that 75% of the country’s most common species had experienced population declines over the previous fifteen years. Over the same period, the study showed that populations of invasive bird species increased at rates as high as 800%.

Abdel Fattah Abd Rabou of the Islamic University of Gaza said the parakeets threaten native birds like hoopoes because they invade their nesting areas. Parakeets can also be a pest farmers by eating grapes and figs, he says.

For trappers and a small group of people who catch birds for fun, the activity is a way to pass the time.

The blockade limits travel to and from Gaza, home to more than 2 million Palestinians.

Israel says the closures are necessary to contain Hamas.

Palestinians and human rights groups see it as a form of collective punishment.

“There is no work and there is nothing to occupy my time other than hunting,” al-Najjar said.

“In the morning, my children ask me ‘where are you going?’ I tell them to hunt. Pray for me and thank God, who answers their prayers and gives me life.

I am John Russell.

Fares Akram reported this story for The Associated Press. John Russell adapted it for Learn English.

words in this story

in cage – adj. kept in a cage – a box made of wire or metal bars in which people keep animals or birds

pest – nm an animal, especially an insect, that causes trouble for people, especially by damaging crops

Our New Blue Jays: Having the Opportunity to Choose Education

Being a bird watcher is a fun hobby for many people | News, Sports, Jobs