Pesky bird lays nest at Sydney traffic light, but expert says it should be removed

By Robert F. Williams Last updated Oct 24, 2022
Share
a stubborn bird took up residence in a sydney traffic light and although transport workers remove the nest four times a month, it keeps coming back.

The common myna has built its nest in the traffic lights at the corner of Mount and Walker streets in North Sydney.

2GB’s Ben Fordham said the bird took up residence in September and Transport for NSW workers made several attempts to remove the nest.

Now the bird has nested in orange light instead of red.

“A lot of trees in the area have been cut down recently, wildlife is struggling and it shows how adaptable these birds can be,” she said.

“It has adapted to a traffic light as it lays the nest.”

Transport for NSW workers even installed cables in an attempt to deter the bird, but efforts failed and it continues to nest.

But Clearly said, despite his love of birds, mynahs are an introduced species and “harm” native wildlife.

“There is a license to remove these birds from the area so it’s tricky, I love all birds but we have to put Australian natives first,” she said. 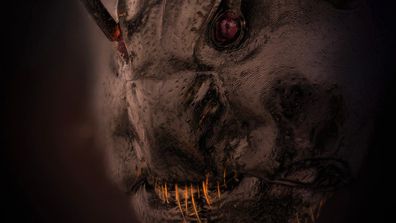 This is not a CGI monster, but a real face