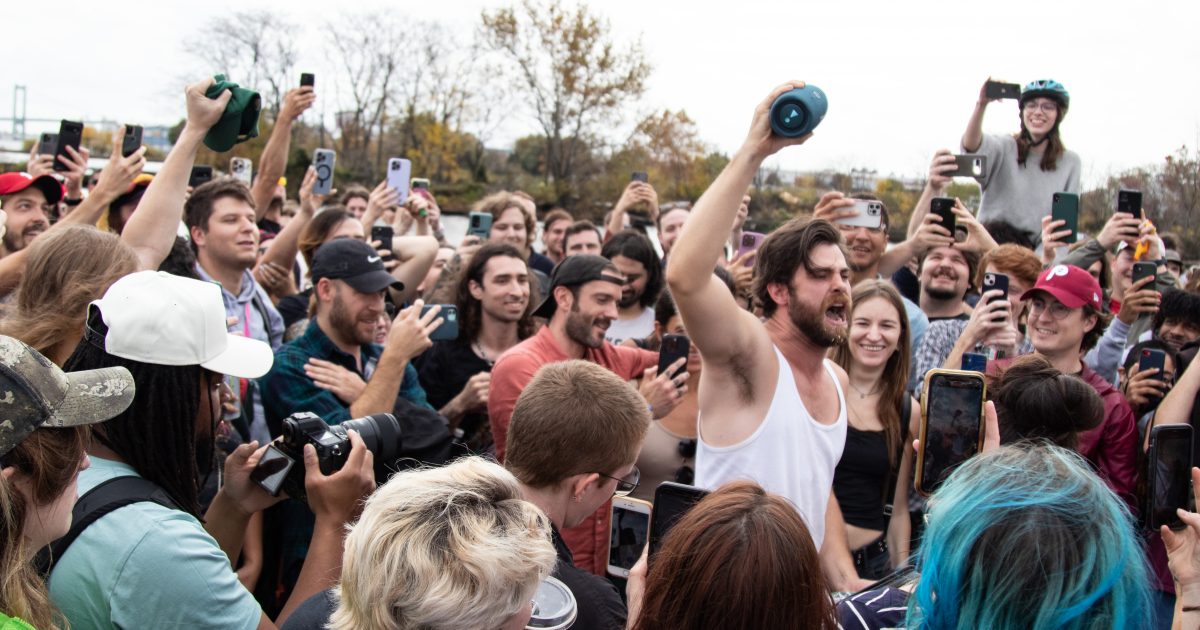 It’s 12 noon on Sunday. The clocks have just been rewound. The sky is overcast, but the breeze is warm. The abandoned pier behind the Columbus Boulevard Giant – right next to the South Philly Walmart – is bustling.

Hundreds of people of all ages (too many to count) gather in front of a line of duct tape, behind which is an improvised red carpet and a table covered with a white tablecloth. Some people carry signs with bird-themed encouragement, others bring folding chairs. Many bring their children. A participant arrives wearing a complete head-to-toe chicken costume.

They had all come to see Alexander Tominsky, aka “soft recess” on Twitter, aka the Philadelphia Chicken, whose the face appeared on the flyers posted in South Philly and posted on all social media.

Circulars invited the city at “that abandoned pier near Walmart” at noon Sunday to see Tominsky consuming his 40th roast chicken in the last 40 days.

When this reporter mentioned why an Uber was needed to get to Walmart, it only took the driver a moment to recognize the event — they had heard about it on r/philadelphia.

The event, Tominsky’s poster made it very clear, was not meant to be a party.

The 40th day of Tominsky’s crusade to eat chicken ended up falling on a day when many Philadelphians felt a lot less party-loving than they had in recent weeks, anyway. Saturday brought not one, but two sports championship losses for the city, as the Union lost the MLS Cup and the Phillies were defeated in the World Series.

But for some, the chicken-eating event was a perfect, upbeat end to the weekend — even if it wasn’t a party in itself.

“I feel like the city is so electric with everything going on,” said participant Emma Purcell from South Philly, “it feels like yesterday something was over, and we wanted it to continue , You know?”

Anna O’Brien of West Philly, who watched alongside Purcell, agreed: “It’s so simple. Why not just watch? It’s a beautiful day, especially after last night – I think the moment felt like a bit of a kismet. I think we needed it after the defeats.

Attendees watched, clapped and sang as Tominsky chewed on the chicken, pausing periodically to let him do his thing or to drink flavored water he had brought with him. Sometimes he looked like he wanted to put everything back together. (This only happened after it was over and most of the crowd had dispersed.)

The chants ranged from “Eat that chicken!” to “Not a Party!” *clap clap clapclapclap* to “ONE MORE DICK!” People shouted words of encouragement from the crowd: “Slam that big bird!” “WE LOVE YOU CHICKENMAN!!!!” “That chicken has nothing on you!” “Go birds! »

When Tominsky started his chicken-eating journey 40 days ago, he could put away a whole chicken — without sauce — in 20 minutes, he told Billy Penn. But since then, it has become harder for him to get the roast chicken down, taking around two hours to get there.

He did his best to speed up the process in front of the hundreds of observers, hoping not to “bore everyone”, he said. He started on time and finished drinking around 1 p.m.

Because the pier is flat and the crowd was so thick, for many in attendance the experience was not so much watching Tominsky eat chicken as watching people watch someone eat chicken and getting soak up the atmosphere.

Some folks took on the visibility challenge by getting an early seat up front. Parents towards the middle or back of the crowd put their children on their shoulders. The grown adults jumped on the shoulders of other grown adults.

Why the large crowd? Depends on who you asked – responses ranged from curiosity, to community, to wanting to be part of local history (which is getting richer by the day, clearly).

Andrew – a South Philly resident who just moved to the city of Los Angeles 8 months ago – saw the flyers in his neighborhood, received a text from his sister in California about the social media buzz and said thought the pier “looked like the place to be today.

“Philly has a sense of identity that’s very different from a big city,” he said. “I’ve lived in New York and Los Angeles, and I think there’s like a kind of underdog element in that city and then I also think of this event… I think people will expect that from Philly.”

“I’m moving in August,” longtime Philadelphia-area resident Hailey replied to Andrew, “and I’m going to miss stuff like that.”

Others agreed that the event screamed Philadelphia.

“I think the best part of it all is…in another town, you get a text about the chicken guy, you’d be like what the hell are you talking about?” said Fishtown resident Daniel Fisk-Kallish. “It was so normal. Oh, on the Walmart pier? Yeah.”

Kathy Chan, a recent Temple graduate, came to the dock with current student Matthew Altea, who was documenting the event as part of a multimedia course.

Ahead of the event, Chan said she expected the meal portion to be “very lackluster,” but was sure the crowd would bring an air of excitement and specialness to the event.

“It’s a challenge,” Chan said. “And I think Philadelphians really like a challenge. And if you tell them it won’t be something, Philadelphia will tell you, it absolutely will be.

Sarah Skochko, a longtime Philadelphia-area resident who currently lives in Mt. Airy, brought her young daughter Alma in a stroller.

“It’s part of Philadelphia history, and I want it included,” Skochko said. “Besides, Alma just started solid food, so maybe the chicken man can be, like, a good role model for her.”

Skochko’s interest in the event, however, went beyond simply making sure Alma could experience what will no doubt remain a part of local lore for years to come (such as the Philly Dump Poolthat she lived nearby but that she regrets never having visited).

“I feel like the rest of American society has turned into some sort of dystopian, capitalistic, meaningless, soulless hell,” she said. “So we have all become nihilists. And something like that – which isn’t done for profit, or really doesn’t make sense – is refreshing.

Austin Darpino and his friend Mickey, both from South Jersey, had a bit of a “why not” attitude toward attending the event.

“There is no broader meaning here. I don’t think there’s anything to be taken from this as a moral lesson,” Darpino said. “He’s just a guy who eats chicken.”

Was attending the event a good alternative to whatever they could have done at noon on a Sunday? “I don’t know yet,” Mickey said about 55 minutes into the event. “Football starts at 1, so I don’t know,… I guess I’m out of the house, so I guess that’s something.”

With the Philadelphia Chicken just minutes away from ending their fowl chase, the jazzed-up crowd moved past the warning tape and closed in, surrounding the table of Tominksy. People clapped, clapped, raised spiritual fingers.

As he prepared to take his last bite, Tominsky stood up, held his plate in one hand and grabbed a Bluetooth speaker playing Bruce Springsteen’s “”The streets of Philadelphiaas he sang, then shouted “IT’S JUST YOU AND ME, MY FRIENDS” before plunging his face into the plate and finishing off the bird.

Beard adorned with rotisserie chicken scraps once he finished his task, he looked around at the crowd of people chanting “HERO, HERO, HERO”.

“I’m not a hero, I’m just a man,” he said, motioning the crowd to calm down. “I ate chicken. I did my best. Thank you all for being here, and thank you for watching me consume.

Cheers erupted from the crowd again and Tominsky applauded his observers. People started coming out, but many stayed for pictures with Tominsky. Some took selfies with his chicken dining table. (Yes, just the table.)

It was the first time that Tominsky’s wife, Mallory Weston (some attendees called her “chicken wife”), had really paid attention to her husband eating a whole chicken. Since Tominsky usually ate the chickens at his workplace, Weston had only witnessed it once before, when the pair were out of town together.

Her accomplishment made her “very, very proud,” Weston said.

“I know he was looking forward to it and thinking about how uplifting this is going to be for the people of Philadelphia,” she said. “I don’t think anyone was disappointed here today. And I hope people who see documentation of the event wish they were here to see it for themselves.

After the event, Tominsky felt “really gross” but also “excited” that he would never have to eat chicken again. And no, he’s not planning to spend 40 days in a row eating other foods in the future.

According to Tominsky, he has lost 14 pounds and has frequent bouts of dizziness and body aches, and he also suffers from cramps and brain fog. So uh, don’t try this at home. Please.

Nevertheless, the participation made him happy and he was happy to bring some joy to the town. He also “really liked the idea of ​​a group of people enjoying someone eating food”.

One more thing: Tominsky, once it was all said and done, did he think it was going to end up being a party?

“There was chanting and a sort of ritualistic behavior,” he said. “But I wouldn’t consider it a party. Someone gave me a beer. But I really only took a small sip on the tip of my tongue to get a little different flavor and to see if that would help with consumption. But really, I didn’t want to send the idea that people can drink beer, and then it would be a crazy party, because it’s really just people watching someone consume poultry.