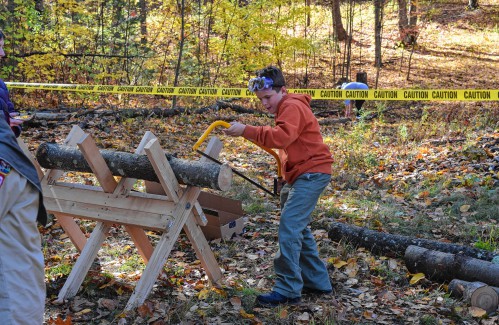 SOUTH DEERFIELD – More than 100 Scouts converged on the Eve-Cowles Family Tree Farm for a weekend of woodland sports as part of their fall camporee.

“I like to come because I can hang out in the woods,” said Cole Dumas of Chicopee Boy Scout Troop 1849.

During the Camporee, 102 Scouts learned different skills, engaged in competitions using these new skills, and camped with their troops. Twelve troops of Boy Scouts ages 11 to 17 came from as far away as Pittsfield, said Kenny White, vice president of communications with the Western Massachusetts Council of the Boy Scouts of America.

“I love axes and cross-cutting hand tools,” he said.

The skills learned by scouts are used in typical relays and competitions that are often seen at fairs. Saturday’s competitions were “less extreme” versions of those activities, Zlogar said.

Scouts used Eve-Cowles Family Tree Farm on three other occasions. This 380-acre forest is used for timber harvesting as well as habitat enhancement for birds and other species. Owner Laura Eve often shares the farm with the community for educational purposes.

“We see this as an opportunity to learn more about conservation and to promote a love of the woods,” she said. Eve noted that the American Tree Farm System named her family farm the best regional arborists of the year for the Northeast in 2016. She said that was primarily due to the community outreach the farm does, with hosting the Boy Scouts as a great example of that work.

On Saturday morning, the Scouts learned how to stack wood, different methods of chopping wood and cutting logs, sharpening tools, making fires and throwing wood. In the afternoon, they put their skills to use. They competed in timed relays, choosing representatives to compete for the winning title of fastest wood cutter or log hauler.

One of the more complex timed relays consisted of a three-part competition. Six scouts tied a cable around a log. They then pulled the log up the hill using the cable. Once this was done, they rolled the logs using a tool called a peavey. Finally, the scouts tied a knot called a wooden hitch to the log, bringing it back to the starting point.

Kason Fellow of South Hadley Scout Troop 303 recently joined the troop and said if he was ever out in the wild he would use the skills he learned at Fall Camporee. He said his favorite part of being in the Boy Scouts was “doing stuff like that.”

Pesky bird lays nest at Sydney traffic light, but expert says it should be removed