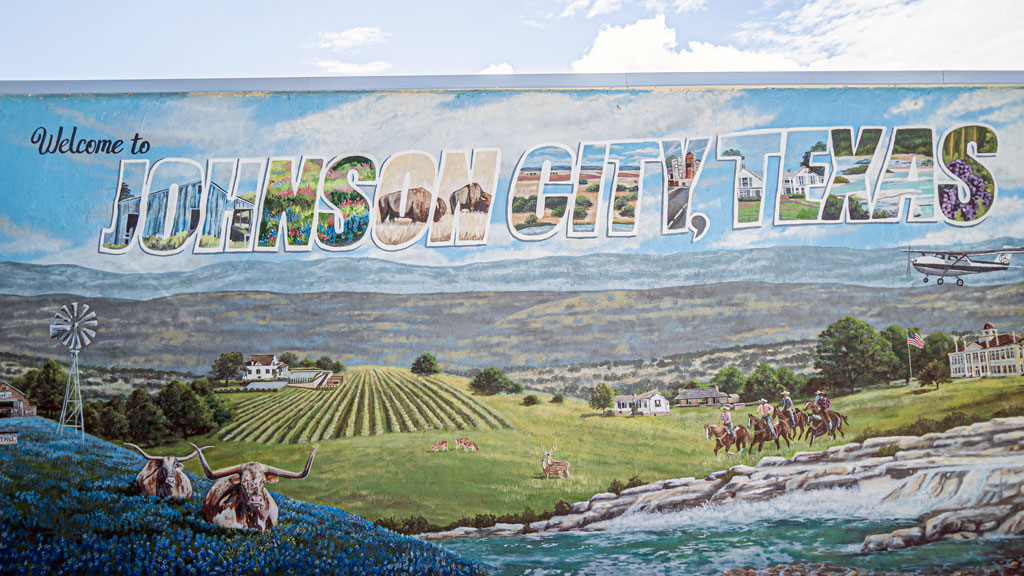 The Johnson City Mural showcases Hill Country grandeur at its best. While the rustic charm that surrounds the town draws you in, the multitude of bars, shops and restaurants will keep you there. Staff photo by Dakota Morrissiey

The Johnson City Mural depicts the hallmarks of Hill Country life: longhorns, cowboys, bluebonnets, vineyards, rivers, a stone courthouse and, of course, rolling hills. But downtown is more than just rustic charm. The city center is full of places to eat, drink, shop and relax.

This reporter spent a Tuesday afternoon exploring and sampling a slice of Johnson City. I parked next to the Blanco County Courthouse, one of many beautiful stone structures that define the Hill Country. It was clear that downtown was booming. All the windows were occupied by an array of art galleries, cafes, brasseries and boutiques. The town square is within walking distance, and it’s not difficult to stroll along US 290, which doubles as Johnson City’s main street and contains plenty of stops for a bite to eat or a drink.

Like many small towns, Tuesdays are slow and there wasn’t much open, but I was surprised to find so many trendy shopping spots. The Texas Vintage Motorcycle Museum and the mill of science are also dominant features of Johnson City’s downtown landscape. Both are worth seeing when taking a trip this way. 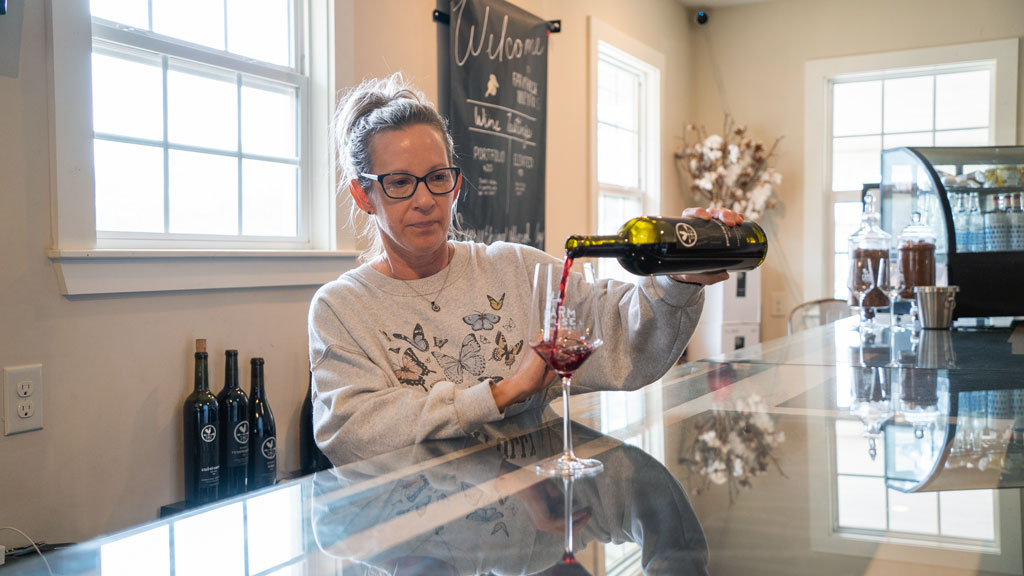 I was drawn into the Farm Vineyard Tasting Room on my walk down Main St by an “open” sign and a shiny Airstream trailer parked out front. As I walked through the doors, I was greeted by Carrie Hillabrant, a tasting room attendant with years of experience in the Hill Country wine scene, but new to Farmhouse Vineyards.

“I think it’s the cutest little town,” said Hillbrant, who had only worked in the tasting room for a month.

She recommended I try Farmhouse Vineyards’ Cultivated, a red blend of 60% Cabernet Sauvignon, 32% Merlot and 18% Petit Verdot. Hillabrant described it as earthy with a bit of spice and well rounded with a smooth finish. My tastes aren’t sophisticated enough to back up his description, but I found it pretty good.

Farmhouse uses 100% Texas grapes for their wine, which is very important. According to the American Viticulture Association, only 75% of the grapes used in a wine need to come from the state for it to qualify as Texas wine.

As I sipped my wine, Hillabrant broke down the layout of Farmhouse Vineyards, which is actually located in Brownfield, a small town outside of Lubbock. The owners of the vineyard chose to open a tasting room in Johnson City because it’s in the heart of Texas wine country, and they’re not wrong. US 290, which runs through Johnson City, is also called Texas Wine Road 290 because dozens of wineries and vineyards dot the highway from Interstate 10 in the west to Austin in the east.

The tasting room is built out of an old house, and it feels like visiting friends and family when you walk in. But the exterior part is what really attracted me. A smooth airflow trailer, gyroscopic wind chimes and plenty of seating made it obvious that this would be a great place to visit in cooler weather. The airflow was actually the original tasting room, which later expanded to the entire property.

As I finished my wine, I asked Hillabrant where to grab a bite, and she recommended Proof & Cooper at The Old Lumber Yard. It was a quick stroll and I was seated in an open dining room adorned with deer heads, Edison bulbs, and lots of bare wood furniture.

Two items from the Proof & Cooper lunch menu: the turtle brownie and the smoky club sandwich. The whole restaurant selection could be described as quality, country cuisine. Staff photo by Dakota Morrissiey

I asked for the highest thing on the menu, which ended up being the smoked club sandwich. The nested layers of smoked turkey and buttery Texas toast are hard to beat. The menu is fairly simple, classic country fare with a few hip twists.

Somehow I couldn’t refuse dessert and ended up inhaling a turtle brownie with two scoops of vanilla ice cream. It was another hard-to-beat pairing, a one-two combo of melted chocolate and cold creamy vanilla.

This is Proof & Cooper’s second location, the first being in Dripping Springs. In fact, I had heard of it before through its annual hog wrestling competition which features would-be hog wrestlers trying to put a T-shirt on a rowdy hog. 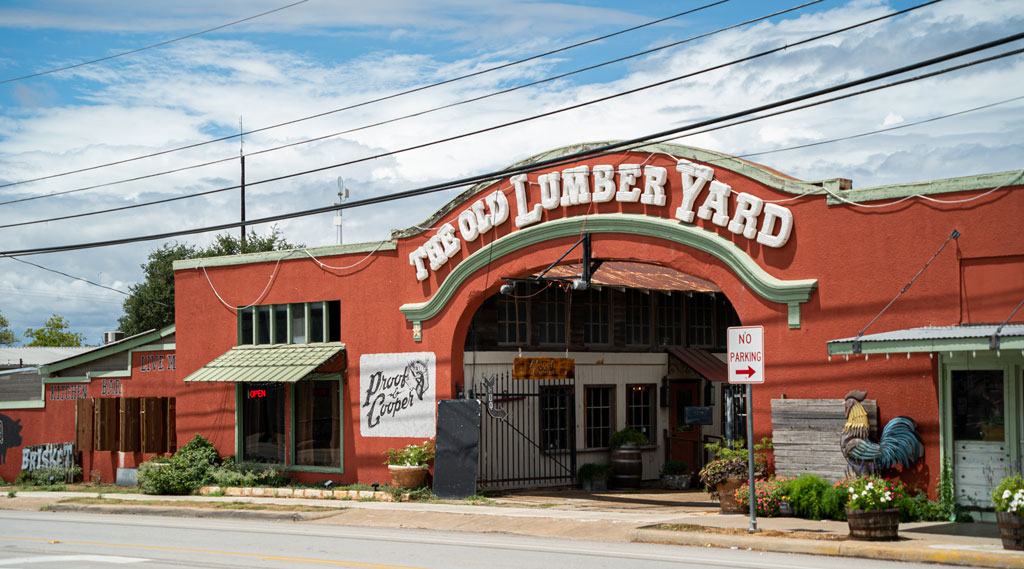 The Old Lumber Yard in Johnson City is home to Proof & Cooper’s and more. Staff photo by Dakota Morrissiey

As Tuesday afternoon drew to a close, I returned to the car. It wasn’t my first time to Johnson City. I had coffee at Black Spur and sipped it in the sculpture garden, and had a craft beer flight at Reck ‘Em Right Brewing Company while a three-string band plucked old songs cowboy.

Johnson City might have the most packed of all Hill Country getaways. Be sure to visit on a weekend and see for yourself.

Proof & Cooper at The Lumberyard

Classic country kitchen in a simple and robust space. Grab drinks or food, watch live music and maybe even fight a pig.

A great popular place for beers and homemade southern food.

A hidden spot for BBQ, craft beers and live music.

An upscale American bistro that recommends booking ahead of your visit.

The Johnson City outpost for Alex Anthony Vineyards on the road to Fredericksburg. A friendly place to sip and socialize.

A small cafe built into an art gallery and sculpture garden on Main Street in Johnson City.

Advertised as one of the best burger joints in the Hill Country.

A health-conscious cafe inside the Science Mill.

A speakeasy on the square to relax and enjoy the sweetness of the spirits.

A beer garden in the heart of the city for locals and tourists.

A fun cafe that teams up with the Texas Vintage Motorcycle Museum on weekends.

A salon and a fashion boutique with an urban and rural look.

An antique and vintage store with a handpicked selection of fashion and home decor.

A whimsical boutique filled with the heart and soul of a small town family.

This is by no means an exhaustive list. Locals, let visitors know your favorite places to shop, dine, and drink in the comments section below.

Find more articles like this in Eating and Drinking

Demolition of the twin towers: 40 stray dogs moved; the administrator is asked to organize a “dummy explosion” to save the birds