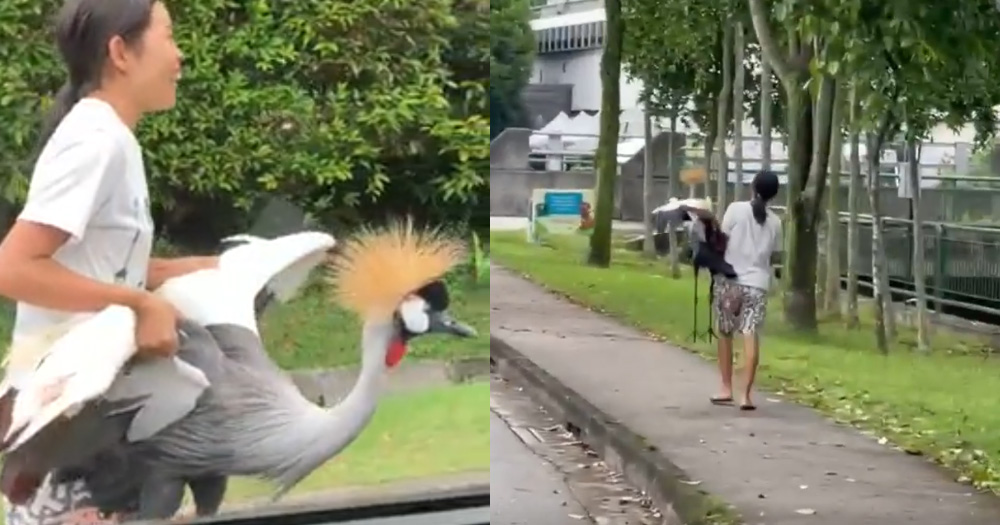 Follow us on Telegram for the latest updates: https://t.me/mothershipsg

Here’s something you probably didn’t expect to see on a Wednesday afternoon.

A video circulating on social media appears to show a woman walking down a street in Singapore while holding a large, exotic-looking bird in both hands.

The footage is taken from a vehicle’s perspective and shows the driver pulling the woman who also seems aware of the ridiculousness of the situation.

The bird in question is actually a gray crowned crane, native to eastern and southern Africa.

Unfortunately, they are also endangered due to habitat loss and poaching.

How he ended up in Singapore is subject to speculation, although a common theory is that he was released or escaped from a pet farm in Seletar.

These days, the majestic animal is known to hang out at Seletar Country Club, where he met a number of notable guests.

Drunk customer being escorted out of a bar

However, judging by the latest video and another sent in Mothership by a reader, he may have unknowingly wandered onto private property somewhere along Joan Road.

The second video, presumably taken after the one above, shows the woman walking with the bird as if escorting a drunk customer out of the bar and into a taxi rank.

With the uncooperative crane, the woman then decides to hoist it up and put it under her arm, continuing her walk on the sidewalk.

Top image from Tiagong’s Facebook page and via Mothership reader