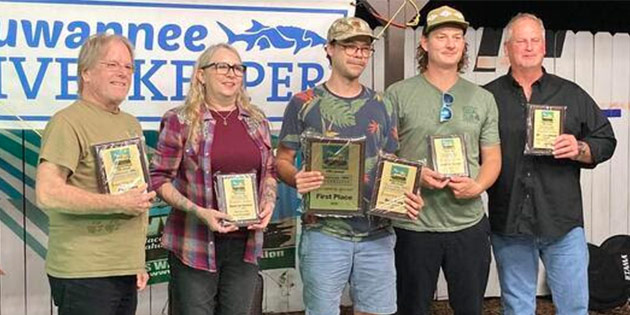 HAHIRA – The winners of the fifth annual Suwannee Riverkeeper Songwriting Contest have been announced at the WWALS fundraiser.

Everyone had a great time, it was a successful fundraiser for WWALS, and here are the winners of the fifth annual Suwannee Riverkeeper Songwriting Contest.

The winners were chosen by judges JJ Rolle, Kenji Bolden and Joe Smothers.

MC Chuck Roberts announced them in this order, as Suwannee Riverkeeper John S. Quarterman presented them with their awards:

Kevin Stephenson of Valdosta, Georgia won a plaque for Best Country Song for “It Don’t Get No Better Than This-The Alapaha.” This is the first year that Kevin has taken part in the competition.

Tracy Horenbein of Tallahassee, Florida won a Best Americana plaque for “Wild and Free.” Tracy competed for the first time this year.

David Rodock of Adel, Georgia won $50 for Best Song from the Interior of the Suwannee River Basin and $300 first prize with “Take Me to the Suwannee”. Last year, David won the plaque for best folk song. He claims this year’s winning song was “twenty minutes and a pot of coffee on a Sunday morning effort”. Imagine if it applies next year!

The videos of the winners will appear soon:
https://wwals.net/pictures/2022-08-20–songwriting/

The kayak winner is: Maya Vallotton.

Maya Vallotton was a $500 sponsor of the contest. Thanks to her and all the other sponsors: Landis International, Blazin’ Paddles & Kayak Club of Valdosta, Imperial Auto Sales, Azalea City Music Academy, Jan Krysa, Laura D’Alisera, Christina Barnes, Gretchen Quarterman and eight others who have bought $100 raffle tickets at the festival, including MC Chuck Roberts, Sementha Matthews, Can Leonard bought two, Bobby McKenzie, Steve Miller, Amy Meyers and Larry Bunkley.

Steve Miller was the high bidder in the silent auction on two non-store items: a food basket from Okra Paradise Farms and a painting by Julie Bowland, “Tupelo Glow,” oil on canvas, 18″x24″. The painting is described by the artist as follows: “A Tupelo tree illuminated by the late afternoon sun at the confluence of the Little and Withlacoochee rivers. Painted from my canoe.

High bid not met for Ethan Abbott’s painting; apparently people did not realize this opportunity. Maybe he’ll let us auction it off at a later event.

Thank you all, especially the musicians, for coming! You support the work of WWALS for safe, clean and usable water in the 10,000 square miles of the Suwannee River basin and estuary in Florida and Georgia.