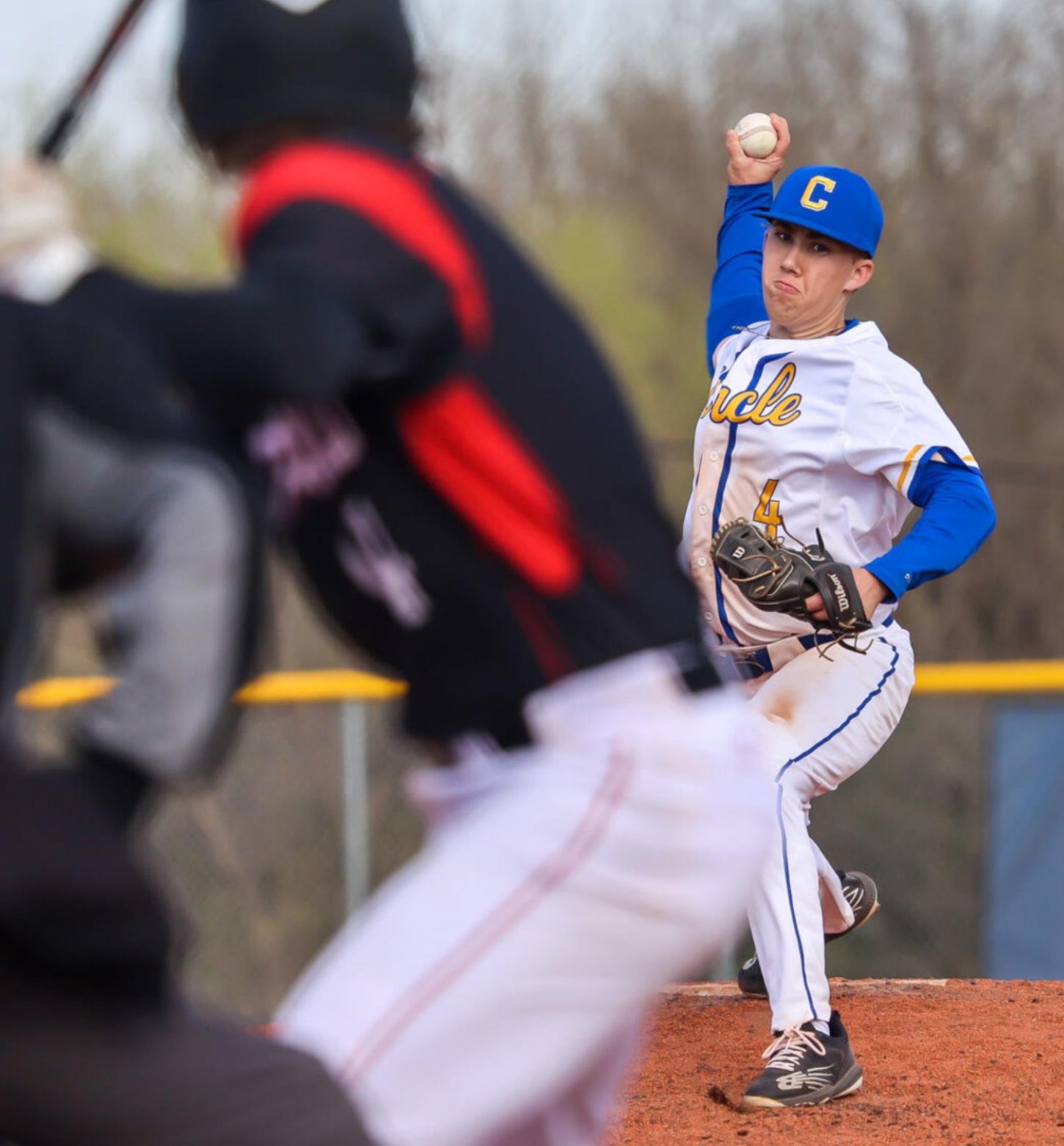 Special Lionel Tipton at the BCTG

TOWANDA, Kan. — Monday’s Circle of El Dorado double sweep had that little something extra, like in the extra-base hits.

“We had four or five guys that had triples,” coach Matt Jordan said afterwards. “I think (junior) Blaine (Bourne) has seven on the year right now. It was a good job of hitting by everyone and a good shot at home plate.

“We hit the ball really hard. I think the guys have made adjustments over the games.

“They had guys that when they swung it, and they threw balls, they had balls that went into the gap,” McCormick said. “We’re not a gap-to-gap team; we are more single-doubles here and there. But we have to get the guys up, move the guys around, use our speed a bit.

McCormick credited Circle’s throw with keeping the Wildcats runners close and not allowing them to accelerate.

In game one, junior Blaine Bourne went 3 for 3 — including a triple — with a walk and an RBI. Bourne showed resilience when, after being hit by a pitch to the head in the sixth inning of Game 1, he not only came back in the final drink, but also started and pitched the final three innings.

Bourne said being hit by the pitch only increased his resolve in Game 2.

Senior Jake Hagemann only reached base once, but it was a triple that allowed Circle to erase a 1-0 Wildcats lead.

Hagemann came back with a torrid second game, going 4 for 4 with three singles and a double and an RBI. It was a welcome sight, he said.

“I struggled (in my) shooting, I hit a lot in the cage, and it finally paid off,” Hagemann said.

Bourne also tripled in that game and had an RBI. Senior Lane Willhite had a three-and-a-half, scored two runs and had two RBIs.

The two games were very contrasting. In Game 1, a two-run third gave Circle a lead he wouldn’t give up, and he scored in every inning thereafter. Junior Cooper Chadwell started and allowed just three runs and four hits in six innings.

Game two was more of a back-and-forth affair, with five lead changes before the Thunderbirds went over a run in the fifth, and Bourne – although he was notched for a run on a throwing error at three bases on a pick-up attempt – held on and struck out nine of the last 12 to end the game. Fittingly, the final outs came on a 5-4-3 double play that wiped out El Dorado’s last hopes.

Jordan said he liked his club to win despite not playing their best.

The losses were particularly bitter for El Dorado (3-7), who took an early lead in both games of the doubleheader, only to see Circle come back and take the lead.

“We just have to keep finding ways to stay in games,” McCormick said. “Then it’s only a matter of time before we get that big hit, take that big clutch step, get some momentum.

“We just have to keep working, doing a bunch of little things to let the baseball gods come back and help us.”

McCormick could take solace in the performance he got from junior Drew Veatch, who had two hits in each game with two RBIs in the last drink. He also pitched five good innings in Game 1.

“He played well for us,” McCormick said. “He’s a guy we’re looking for, and we’re trying to move him around the lineup to find the best possibility for him and us as a team in RBI situations with guys on base.”

He also praised freshman Zac Jacobs, who was just brought up from junior college and had an RBI double in his first college at bat, cleaning at bat, no less.

“We put it in there and said, ‘Go knock,'” McCormick said. “We know you can hit; we saw him in training, and he hit the JV field very well.

“Give the kid an opportunity, and he’s done very well, and we’ll see what happens as we move forward.”

The Wildcats, despite having only seven hits in the final drink, stayed with Circle enjoying six walks, two hits and five errors.

“Our defense has been our Achilles heel this year,” Jordan said. “When we play a good defense, nobody can touch us. But when we keep teams in games, it leads to us having nail biters like (the second game). I hope we play the defense a little better in the next game and make it a little less tight.

“Our hitting was amazing, but we definitely have to limit our mistakes and keep playing our game,” Bourne said.

It wasn’t until the bottom of the fifth that Circle took the lead, breaking an 8-8 tie.

Senior Caleb Freed was on board on an infield single and was sacrificed to second by Kreede Sheppard. One out later, Hagemann’s single drove Freed in—Hagemann’s only RBI of the game.

Last Thursday’s replay — when the T-Birds were outscored 17-1 in a doubles loss to Buhler — went well, Hagemann said.

“We struggled last Thursday against Buhler, but we’re bouncing back,” he said. “We are confident we can beat McPherson.”

El Dorado is back on the road Thursday at Winfield. After that, the Wildcats will then have three straight home dates against Rose Hill, Buhler and Andale before finishing the regular season at McPherson.

“We’re 10 games into the season, and we’re just going to keep working for the last 10 and getting ready for regionals,” McCormick said. “We have been in every game; there are no games that we have postponed. We always fight, and that’s what I like about this group. We keep fighting, no matter the situation.

The early bird beats the jam

Orioles are colorful bird arrivals in May | News, Sports, Jobs