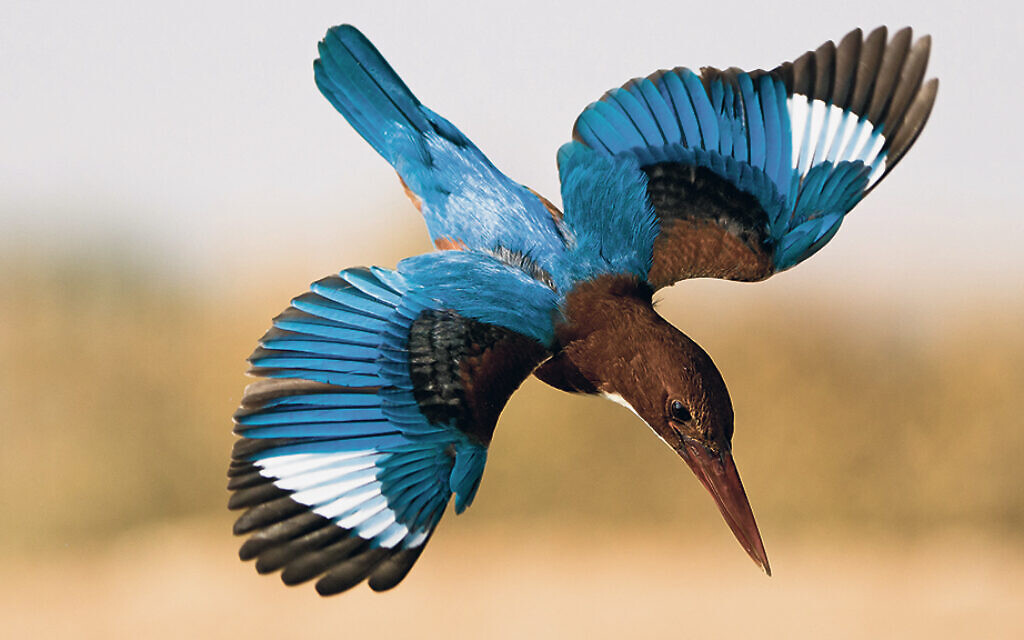 It’s hard for the die-hard among us to deny that birds are beautiful when soaring. The beauty of their flight brings joy in its wake. And sometimes peace comes with it.

To understand how it worked in Israel, start by imagining an idyllic New England village. It’s fall, the leaves are at their peak, there’s a covered bridge over a stream, there’s a village green, and there’s an old barn in a meadow.

There are many partially hidden places in the old barn, and there’s an owl’s nest in one of those nooks.

Migratory white storks fly over Israel; their flight is photographed from a motorized glider. (Thomas Krumenacker)

The barn owls living in this nest prey on rodents that would otherwise eat the crops. So less pesticides, more cereals, more owls, less mice. It’s a fairly well-balanced system.

But today there are fewer wooden barns, even in New England.

Now let’s take the story back to Israel; it’s not a place we associate with old wooden barns, and for good reason. Its agricultural industry is newer, the climate is different, and for various reasons the barns, like most barns built now, are more functional, less scenic, and less attractive to owls. 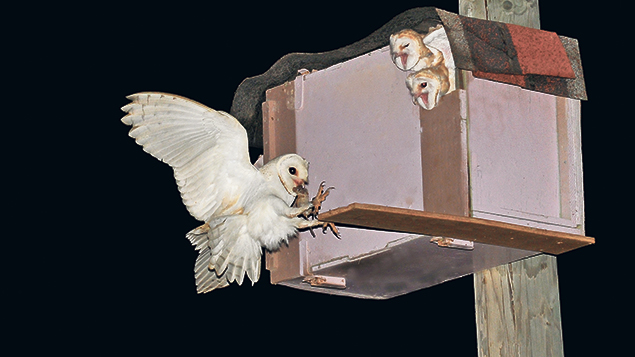 Hungry barn owls are eagerly waiting for their mother. They nest in one of the adapted boxes of ammo crates. (Amir Ezer)

So to bring this story back to this century and to connect it to Israel, we go to the Hula Valley in Israel, which was a lake surrounded by swamps, in northern Israel. It was a breeding ground for mosquitoes, and therefore for malaria. In the 1950s, with the blithe post-war misunderstanding that directly applied science can fix everything straightforwardly, and with the equally blithe disregard for the likelihood of unintended consequences, the lake was dried up.

There were fewer mosquitoes, and that was a very good thing. But the complex natural habitat that had thrived there, the web of interdependencies that provided the land and the people living near it with the natural resources they needed, dried up along with the lake.

In the 1990s, Israelis began trying to rebalance competing needs, bring back some of the species that once lived there, and restore some of the beauty. And there have been real successes there. 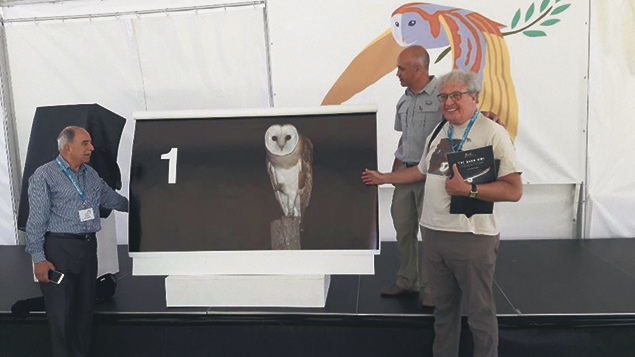 General Mansour Abu Rashid of Jordan, left, and Dr Yossi Leshem of Israel present the barn owl project to the president of Switzerland and the 150 ambassadors stationed there. (Professor Alex Roulin)

According to the Society for the Preservation of Nature in Israel – whose leaders hosted a Kaplen JCC discussion on the palisades in Tenafly last week – the country is a vital resting place for migratory birds. Twice a year, about 500 million birds—that’s 500,000,000, which is a lot of birds—pass through Israel from Europe and Asia, en route to Africa; once they go south, and the next time they go back north. On their way south, the Hula Valley is their last stop before the huge desolate expanses of the Sahara; going up, the valley is the first place which offers them food and rest.

When the Hula Valley dried up, rodents still managed to survive there; farmers put pesticides to kill them. This pesticide also killed a large number of birds. 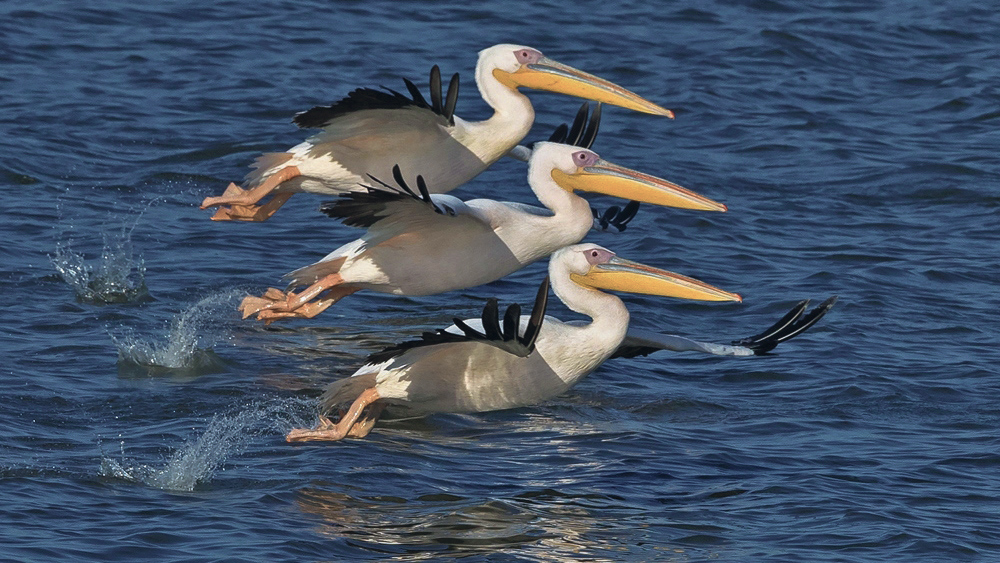 Yossi Leshem, who was among the speakers at the JCC, is a former boss of the SPNI. He is a tremendously accomplished and credentialed ornithologist; he is, among other things, a senior researcher in the Department of Zoology at Tel Aviv University and founder and director of the university’s joint project with SPNI, the International Center for the Study of Bird Migration.

He thought about how to solve the problem of pesticides and birds in the 1980s. “In Malaysia, they were cutting down hundreds of thousands of hectares of rainforest to plant olive trees, and suddenly they started to push a lot of rats on the trees.” Turns out rats aren’t much better for olive trees than pesticides are for birds, but the Malaysians had a great idea. “They put up nesting boxes for the owls, which reduced the number of rats,” Dr. Leshem said.

He realized that owls could also work in Israel, if he could find a way to provide them with nests.

“We started in the Beit She’an Valley,” also in northern Israel, on the Jordan River, “in 1983,” Dr Leshem said. “At first we thought maybe we should bring pairs of barn owls – we had too many at the zoo anyway – but very quickly we learned we didn’t have to bring them.” 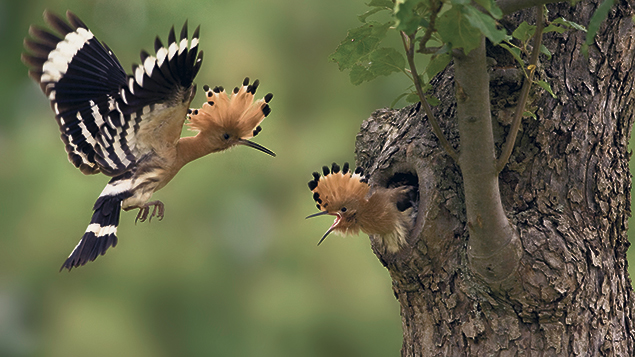 Barn owls eat between 2,000 and 6,000 rodents a year, said Jay Shofet, director of partnerships and development at SPNI; Mr. Shofet also spoke at the JCC.

If people provided nesting boxes, the owls showed up. “Now we have 5,000 boxes,” Dr. Leshem said. And it’s no problem for the owls to find enough to eat. “Farmers who have boxes have stopped using pesticides,” he said. 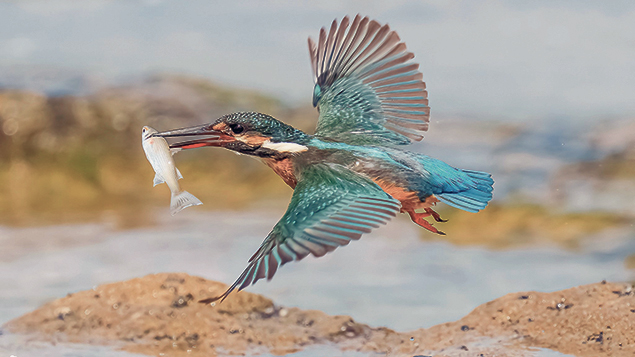 A common kingfisher is on the hunt. (Angel Shmulik)

They stand in the fields like inverted scarecrows; instead of scaring birds away from crops, they shelter feeding birds from crop-demolishing rodents, not only keeping themselves well fed, but helping other birds stay safe.

It was quite easy for SPNI to find wooden crates, he added. “The Israeli army donated thousands of wooden ammunition boxes. Every soldier knows that. We just put them on poles.

Owls seem to have a sophisticated sense of prey availability, Dr Leshem said. In years when rodents thrive, owls have more fledglings. “They can have up to 14 chicks, and maybe even a second and sometimes even a third cycle” of laying. Less prey means fewer chicks. “Sometimes they only have one or two eggs, and some years some don’t have any at all.”

What rodents do they eat? Mice, of course. There are no squirrels in Israel, Dr. Leshem said, and rats do not eat crops. Owls also eat nutria, and — wait! — gerbils. You know, the lazy pets kids have when their parents won’t let them have a cat or a dog. 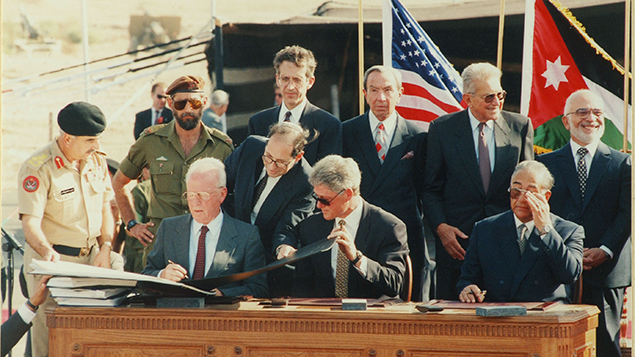 On October 26, 1994, Jordan and Israel signed a peace treaty, and General Mansour Abu Rashid was there; he is in the first row, on the left. Next to him, from left to right: Israeli Prime Minister Yitzhak Rabin, US President Bill Clinton and Jordanian Prime Minister Abdelsalam al-Majali. In the back, from left to right: the Israeli brigadier. General (Res.) Baruch Spiegel, US Secretary of State Warren Christopher, Israeli President Ezer Weizman and King Hussein of Jordan.

(However, owls don’t work as well in cities. Dr. Leshem said researchers have tried setting up boxes in urban areas, hoping the birds will prey on mice and rats, but they don’t. did not.)

There’s more to this story than how farmers were able to use fewer pesticides, not only saving the lives of many birds, but making the habitat healthier for all species, including humans. It has also led to cross-border partnerships.

In 2002, a group of retired Israeli and Jordanian generals visited the battlefields; it was about moving from war to peace. “I said I wanted to show them the boxes, but they said, ‘No! No. They are generals. They are not interested in wildlife. They gave me an hour to show them a box. 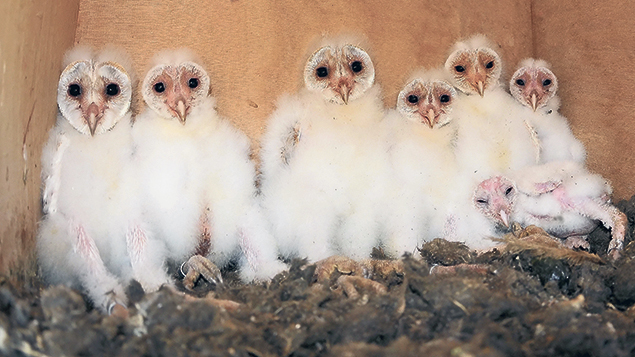 Seven barn owl chicks are in a nest box; the box is one of 5,000 scattered across Israel. (Amir Ezer)

One of these generals was Mansour Abu Rashid, who “was wounded during the Six Day War” – fighting for Jordan – “and was also captured by Israeli soldiers, but managed to escape. He also been injured in 1973,” Dr. Leshem said.

“And then he said that he had spent 35 years fighting the Israelis, but for 28 years he had been involved in peace.”

General Mansour, as Dr. Leshem affectionately calls him, is also a lawyer and former adviser to King Hussein of Jordan; he was there when Israel and Jordan signed their peace treaty in 1994. He was also at the JCC, on the SPNI panel. 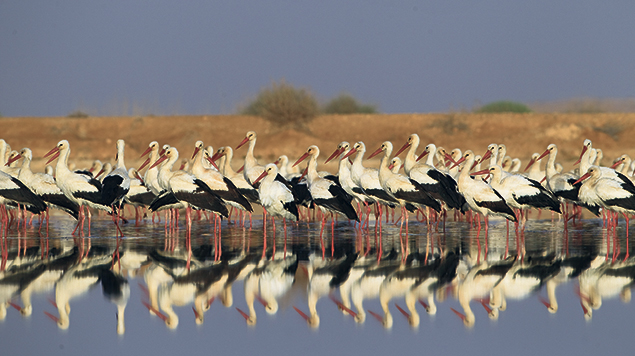 This group of white storks resting and refueling in Israel are among the 600,000 storks that fly over Israel twice a year. That’s 85% of the world’s white storks. (Thomas Krumenacker)

Today, he is the founder and director of the Amman Center for Peace and Development, and he and Dr. Leshem work together to preserve nature and promote peace in their countries. They also became “very close friends,” Dr. Leshem said. “He comes to my house and I go to his house. We consider that working together now is not a matter of environmentalism but also a person-to-person activity.

When he first talked about the owls with Mr. Abu Rashid, Dr. Leshem said, the general said, “’Yossi, we can’t do this. Owls bring us luck. To Muslims.’ But I said this time the owls would bring good luck to all of us.

The barn owl nesting program has spread from Israel and Jordan to Cyprus, Greece, Morocco, Dubai and Switzerland, Shofet said, and he believes other countries are likely to adopt it as well. 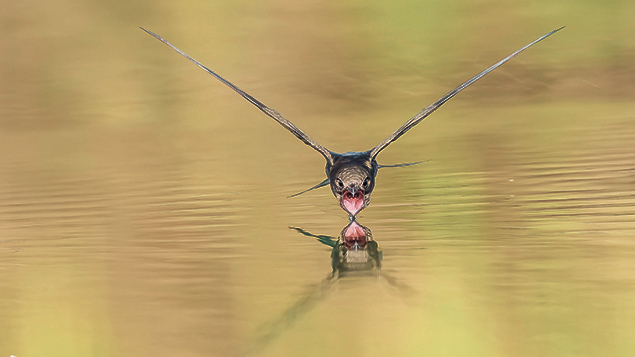 This common swift is in flight; in a thousandth of a second, it will be sipping water — while still flying. (Angel Shmulik)

And then there is the bigger project.

During the JCC panel, the group – moderated by Leon Sokol de Tenafly, co-chair of the American Friends of the Society for the Preservation of Nature in Israel, which sponsored the visit – explained how it works to convert fish farms into sites more natural. environments. Decades ago, kibbutzim turned wetlands into fish farms; wetlands brought disease and farmed fish brought income. But as the world has changed, farmed fish have become less financially profitable and fish farms are deteriorating.

SPNI has transformed one, at Kfar Ruppin, into a bustling destination for birds and other wildlife; he is working on a second, further south, at Kibbutz Ma’agan Michael.

This is not new; the project is progressing well. This brought large numbers of birds to the new, clean wetlands which replaced the fish farms.

The news is political. Although it’s not quite official yet, it looks like Jordan will be working with Israel on regenerating the wetlands, so that the wetlands facing each other across the Jordan can attract birds and wildlife. terrestrial fauna together. It’s not like these species understand, care, or are bounded in any way by political boundaries. And we humans can learn from them.