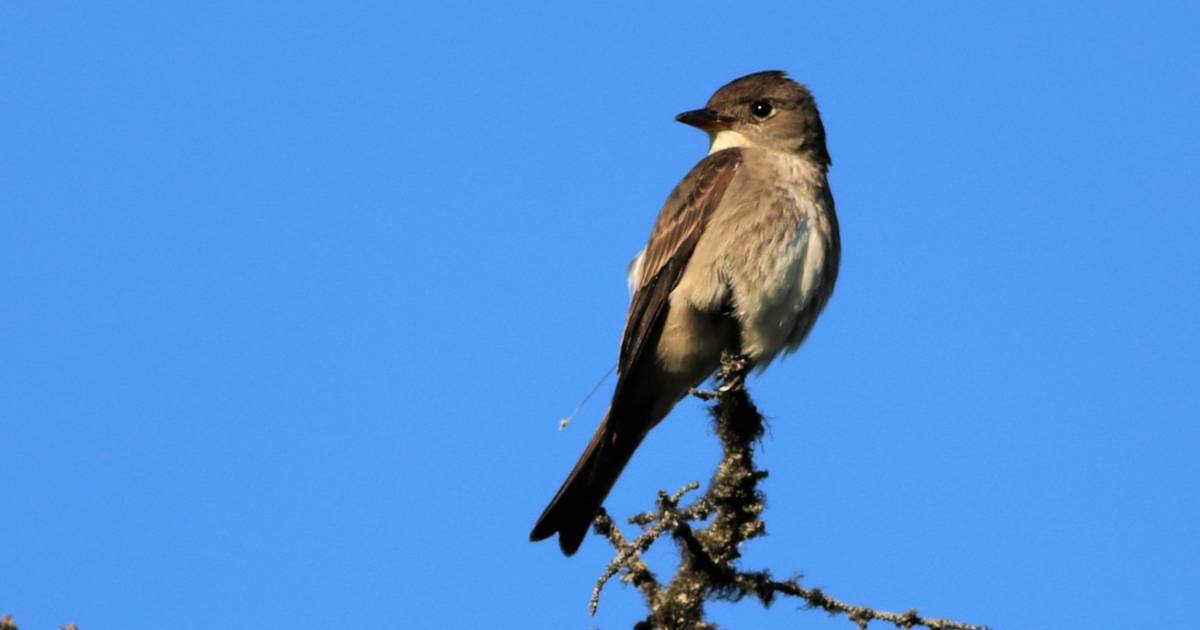 Right now, the songbirds of Brazil are moving about their perches, feeling mysterious impulses that will soon have them leaping from their branches and heading for Alaska.

One such bird is the olive-sided flycatcher, about as big as your hand, with a blocky body and head. Fortunately, these birds will be flying in a few months in a forest swamp in Alaska, Canada or the Rockies, with the mission of breeding.

Julie Hagelin donned her Xtratufs to tour spruce wetlands in Alaska in search of olive-sided flycatcher. The Alaska Department of Fish and Game biologist co-authored a recent paper in which she and her colleagues identified important areas that Alaskan flycatchers use as they head out each fall.

The olive-sided flycatcher has a memorable song, with the males singing “quick, three beers!” to attract a mate. They have one of the longest migrations of any breeding songbird in North America – up to 7,000 miles one way each spring and fall. Pairs of mated birds do not produce many chicks, two to four, and the birds are long-lived – one tagged bird reached 11 years of age.

And – if you’re a child of the 1970s – about eight out of 10 birds in the population have disappeared since you took the bus to grade school. The loss of olive-sided flycatchers is one of 3 billion songbirds scientists estimate the world has lost since then.

This steep decline is one of the reasons Hagelin wanted to study olive-sided flycatchers. From 2013 to 2018, she and her intrepid field crew traveled to Alaska’s scented swamps of Labrador tea and black spruce to capture birds and fit them with geolocation tags. A geolocator weighs as much as a dollar bill, mounted on a bird as light as a stack of 13 cents.

Because olive-sided flycatchers are so shy around people, Hagelin had to invent ways to capture them. It took a lot of trial and error, including attaching a 3D printed decoy of a fake intruder to the spruce tops. This plastic male flycatcher was created with the help of Greg Shipman of the University of Alaska Fairbanks Geophysical Institute machine shop.

Quietly hiding out of sight, Hagelin played a recording of “fast, three beers”.

Often, the dominant bog males would swoop in to oust the intrusive bird, only to be caught in mist nets that Hagelin and his assistants had set up in the forests near Fairbanks, the Tetlin National Wildlife Refuge and Anchorage.

With a good candidate in hand, Hagelin equipped him with a small backpack that included a geolocation instrument. This allowed him—by recapturing the bird the following summer—to determine roughly where it had been during its months away from Alaska.

To his surprise, the Alaskan birds wintered in Colombia, Ecuador, Peru and western Brazil.

“I knew they had come a long way, but we actually have to quantify how far they’re going,” Hagelin said. “It’s such a wide and diverse journey. So many things have to go right. It’s amazing that any bird can do it.

She and her co-authors identified 13 “significant stopovers,” places where individual birds spent more than a week. In these areas the birds were probably resting and refueling.

The forests of Guatemala and southern Mexico were favored by birds during fall migration. A swath of national forest in northeastern California is important to birds each spring as they return to Alaska. The birds also stopped in three regions of Central America at once when leaving Alaska in the fall and returning in the spring.

A few other fun finds: A male and female Hagelin pair captured southeast of Fairbanks returned to the same small patch of Alaskan woods every spring. But the male spent his winter in South America 1,000 miles north of the female.

Once on the wintering grounds in South America, the flycatchers don’t seem to twirl much.

“One of the birds we monitored didn’t move more than 100 meters for four winter months,” Hagelin said.

While Alaska’s spruce swamps remain safe and ultra-rich in insects – allowing olive-sided flycatchers to breed and hatch fledglings each northern summer – the other stretches of their journey through the Americas do not are not as reliable.

Deforestation and other degradation of bird habitat along the way likely reduced the number of olive-sided flycatchers able to make the epic journey to Alaska and elsewhere in North America.

Hagelin hopes the important migratory sites she and her co-authors identified in their recent paper will help managers along the way protect critical habitat for flycatchers and other declining songbirds.

For those feeling a little helpless but want to help the songbirds return to Alaska, Hagelin suggests buying “Bird Friendly Coffee.”

Based on the work of scientists at the Smithsonian Migratory Bird Center, bird-friendly certification ensures coffee comes from farms that provide decent habitat for birds. Farms must have at least 40% tree cover and at least 10 tree species, among other requirements.

According to scientists at the Alaska Songbird Institute, three-quarters of the world’s coffee plantations are in full sun, as growers have cut down the trees. When forests disappear, so do migrating songbirds.

The bird-friendly coffee farms feature shady, diverse landscapes favored by olive-sided flycatchers and many other species of songbirds that are about to make the leap to Alaska soon. Supporting these farms and the companies that roast their beans may be one small way to make a difference, Hagelin said.

“You can enjoy a bird that passes through your garden.”

Finally the wait is over, check out the first preview of the song which is set to be the love anthem of the year ‘Tata Karde Ne’ – Teaser Out Now