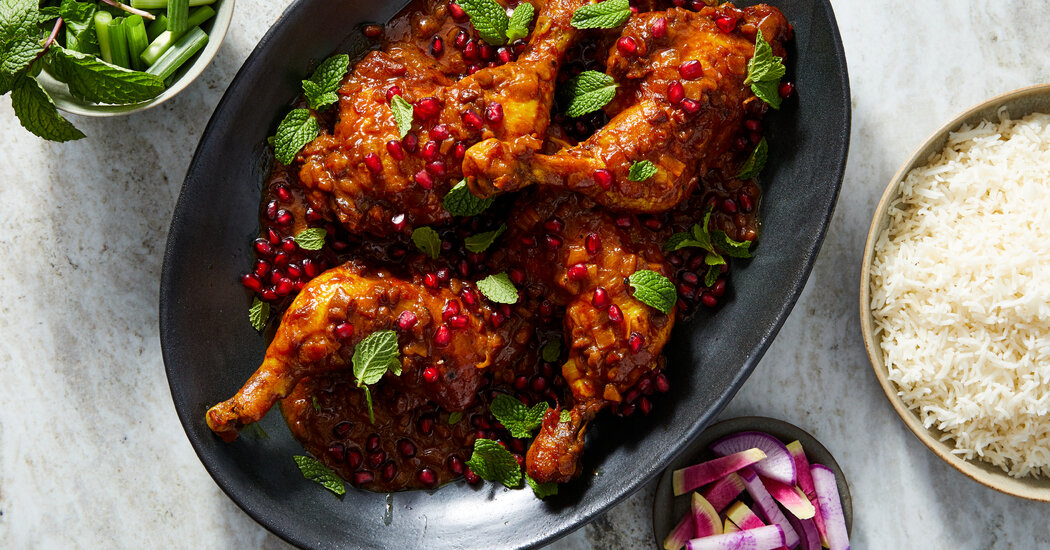 What to cook this week

Hello. My family wasn’t enough, I guess, so I recently started feeding the birds: all kinds of seeds for all kinds of birds, in different devices, on complicated hooks designed to outwit squirrels and trash pandas. And it was a joy to meet my noisy new customers, visible from the kitchen while I cook: sneaky sleek blue jays and marauding blackbirds, red-headed woodpeckers, big little tits, the occasional cardinal with his calls. of applaud, applaud, applaud. I love the idea of â€‹â€‹the word spreading on bird social media, the original Twitter: Great Food at Sifton’s. We’ll see each other there?

Which means Sunday dinner is a bit trickier these days. There is the filling of the feeders to start, then the preparation of a family meal, that if I’m lucky we can eat early with the soundtrack of the birdsong. This week’s offerings include sunflower seeds for the avian mob, and plenty of pomegranates for the humans, in the form of Naz Deravian’s recipes for Shab-e Yalda’s Persian Winter Solstice Feast: A Pomegranate Stew and chicken called khoresh morgh nardooni (above) and kaale seerabeh salad, a raw pomegranate-walnut sauce made into a vinaigrette for vegetables and fruits. The actual solstice isn’t until the 21st, of course. But as they say in the South, I’ll tell you what: I need light and longer days now.

A bowl of farro and broccoli with lemon tahini for Monday night? Maybe, although I like the taste of these Indian butter chickpeas.

Tuesday night, I like it midnight pasta with roasted garlic, olive oil and chili, quick and elegant and delicious, at least after you’ve roasted the garlic. (Roast a few heads instead of what the recipe calls for. Anything left over will keep in an airtight container for a few weeks in the fridge and is great in salad dressings, on pizzas, in all kinds of pasta.)

The cook’s choice Wednesday night: you can either make this hearty parmigiana mushroom leaf situation or my Parm freestyle roast chicken, which is not a recipe at all.

And then on Friday you can run the week with a succulent Dijon and Cognac beef stew or, if you’re pressed for time, with slow roasted spicy salmon with cucumbers and feta.

Thousands and thousands more recipes are waiting for you on New York Times Kitchen. You do, yes, need a subscription to access it. We think the investment is worth it: not just for the recipes, but for the tools and features that make them easy to cook, including the subscriber notes that follow each. If you haven’t released one already, hopefully you will subscribe today. (We also offer gift subscriptions.)

And we’ll be there in case something goes wrong along the way. Write to us at cookingcare@nytimes.com and someone will get back to you. (You can also contact me if you want to say hi or make a complaint. I’m at foodeditor@nytimes.com. I read every letter I send.)

Now this has very little to do with scrambled eggs or deep-fried borek, but take a moment to review the 10 Smithsonian Magazine winners the Comedy Wildlife Photography Awards for 2021.

here is a fascinating look at a native potato it may be a key to our future, by James Dinneen for The Counter.

Take the time to read this watch news, even if you are relying on your phone at the moment. Watching the news is fascinating: fashion in short.

Finally, The New Pornographers performed at Webster Hall in New York City last week as part of the 21st anniversary celebration of their debut album, “Romantic Mass. “No good video of that (yet!), But here’s the”Letter from an occupantLive from Matador Record’s 21st Anniversary in Las Vegas in 2010. I’ll be back on Monday.

Accommodations near Sandringham in Norfolk