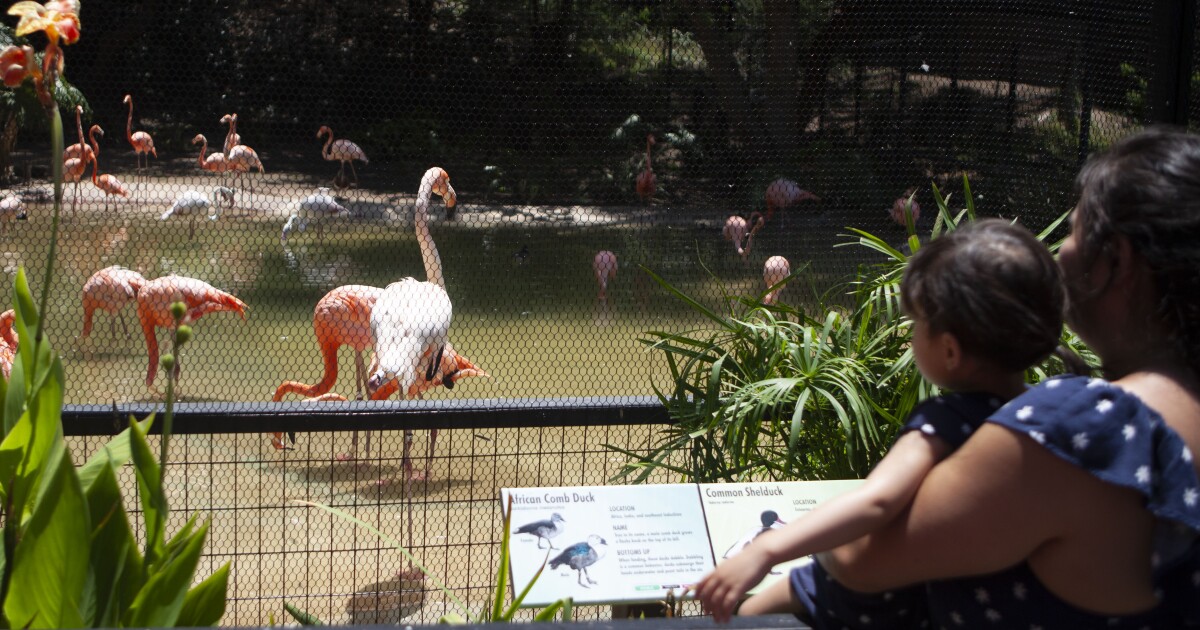 Some birds at the San Diego Zoo have been moved to new locations and poultry farms are taking precautions with their flocks following news that a highly contagious strain of bird flu has hit California.

The flu was not detected in San Diego County, but has spread across the United States.

Visitors to the San Diego Zoo will notice that the flamingos are missing from their usual, highly visible spot in the front plaza, having been moved to a newly covered duck pond at the bottom of the hill leading to the polar bear exhibit.

Guests also won’t see any peacocks or peahens roaming the grounds, as they have been moved to an enclosure not open to the public behind the Zoo Hospital.

The moves follow the California Department of Fish and Wildlife’s announcement Thursday that wildlife disease specialists confirmed that the highly pathogenic Eurasian avian influenza H5N1 had been detected in three wild birds found in Colusa and Glenn.

Bird flu was first detected in wild birds last December and early January in North Carolina and South Carolina, and the first outbreak in a commercial flock of turkeys was discovered in early February in Indiana. The H5N1 strain had been on the rise across Europe since October 2021.

The zoo and Safari Park had made plans to protect its 3,700 birds over the past few months.

“We try to be safe but not go overboard so that we don’t move the birds unnecessarily well in advance,” he said. “We thought about those scenarios.”

The disease is thought to be spread by migrating waterfowl, making flamingos and other zoo waterfowl the most vulnerable to catching the virus. Nollens said the Safari Park waterfowl will be the first to be moved indoors, with more birds to follow in the coming weeks.

Bird flu viruses are not uncommon, but the H5N1 strain circulating in the United States and Canada has caused illness and death in a wider variety of wild bird species than in previous outbreaks, according to the California Department of Fish and Wildlife. The virus is also highly contagious to domestic poultry, although there are no confirmed cases in domestic poultry in California.

Nationally, 40 million cases have been reported in domestic poultry in 37 states, according to data collected by the Centers for Disease Control and Prevention. The CDC also reports that on Friday, the flu was detected in at least 1,826 individual wild birds in 43 states and the District of Columbia since January.

Nollens said the Zoo and Safari Park had never had to take the action they are now taking, although they were prepared to do something similar about five years ago when there was a threat of an outbreak of exotic Newcastle disease.

He doesn’t know how long it will be before the last threat passes and the birds are returned to their original location, but he hopes the flu will subside in the fall or winter.

Farnk Hilliker, San Diego Farm Bureau board member and owner of Hilliker’s Ranch Fresh Eggs, Inc. in Lakeside, said he’s not taking any extra precautions because his poultry farm has a strong biosecurity plan in place. since another avian flu epidemic occurred. 15 years ago.

“We had PPE (personal protective equipment) before it was cool to have it,” he said.

Any visitor to the chicken coop is required to wear a face mask, and equipment and vehicles are regularly sanitized, he said.

“We keep everything contained and constantly sanitize for all the potential things that can happen to the chickens, whether it’s bird flu or exotic Newcastle disease or coryza or anything else the chickens could possibly catch,” he said. -he declares. “We take biosecurity very seriously.”

Hilliker’s Ranch Fresh Eggs is one of five poultry farms in the county and one of the smallest with 30,000 birds. Hilliker said there are about 2 million chickens in the county.

Like other poultry farms in the state, Hilliker said it follows California Egg Equality Insurance Program rules as well as U.S. Food and Drug Administration biosecurity rules, which are mandatory for all farms. poultry farms of more than 3,000 birds.

Despite these precautions, Hilliker still has some concerns about the new strain.

“We could still get it,” he said. “Precautions just limit your risk.”

The U.S. Department of Agriculture’s National Veterinary Services Laboratories confirmed the detection of influenza in two Canada geese and an American white pelican on Tuesday.

The birds had been collected by the US Fish and Wildlife Service on July 5 from the Sacramento National Wildlife Refuge Complex and submitted to the US Geological Survey’s National Wildlife Health Center for preliminary testing.

Transmission of the virus strain to humans is low, with the CDC reporting one case in April and no others dating back to 2010.

Nollens said he was aware of this case and described the infected person as someone who came into close contact with infected birds during the depopulation of a poultry farm affected by the outbreak.

The CDC recommends people wash their hands and wear gloves and masks if they come into contact with wild birds or domestic poultry.

Although infections appear to be rare in songbirds and common backyard birds, the CDC advises against feeding and providing water to wild birds, especially near backyard poultry or other birds. captives such as ducks, geese, pigeons, doves and parrots.

Bird flu can also affect predators and scavengers that feed on infected birds.

The public can report dead wild birds using the CDFW Mortality Reporting Form or by calling (866) 922-2473.

It’s only July, but the supply of a Christmas favorite is already under threat

Did the DAR really force Jimi Hendrix off the Monkees tour?